Suchindram & Kanyakumari: Journey to the southernmost city of India

- December 08, 2011
Overview: Continuing from the previous post, from Trivandrum we hired a taxi and headed towards Kanyakumari which is around 3 hours from Trivandrum. We hired an Innova and the road leading to Kanyakumari is not a typical highway and it looked so crowded as if we haven't left the city at all. We visited the famous Suchindram temple on the way which is very popular among tourists. We saw the huge Kalyani tank and the big Gopuram typical of Tamil Nadu temples. It has a very popular legend which can be read in the reference provided below.
We reached Kanyakumari at around 8pm and checked into a hotel there. 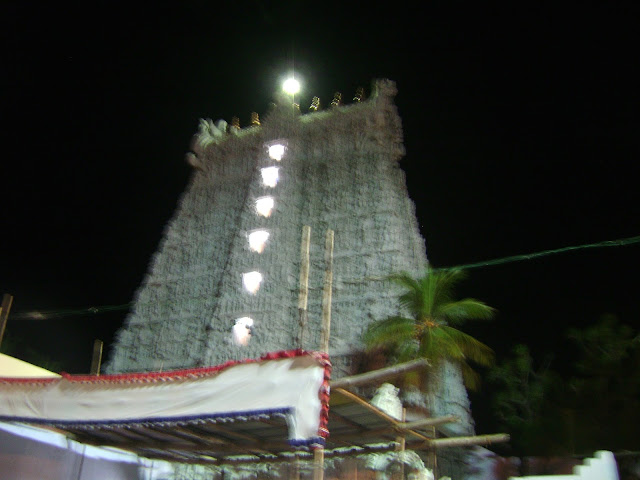 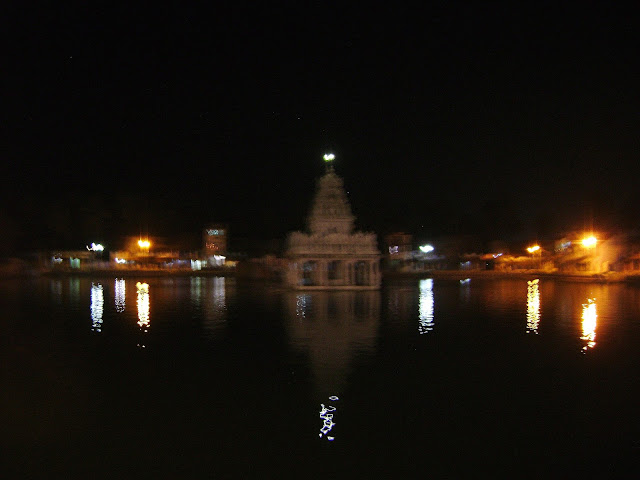 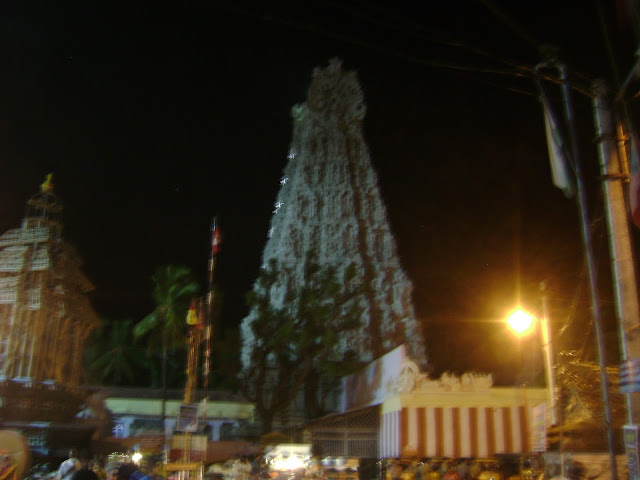 Day 3: Being in Kanyakumari, one cannot afford to miss the elegant sunrise. So we started the day very early and headed towards the sunrise point at around 4:30am in the morning. And I must tell that it did not look like 4:30am at all looking at the huge crowd gathered at the place to get the first rays of sun on them. We waited patiently for the Sun God to show its face to us. Slowly the darkness made way for light and the Sun showed itself at around 6:30am. It was magical and was like the sunrise of the millennium looking at people dance and rejoice at this. We clicked umpteen pictures of the sunrise and played by the rocks getting wet in the sea water. The gentle breeze in the morning was welcomed by all. 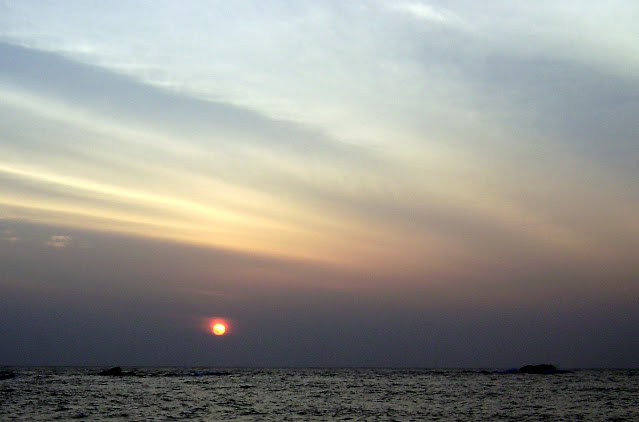 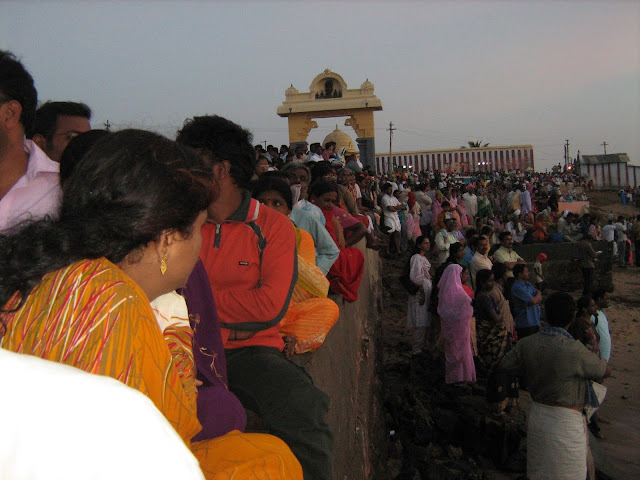 We then returned back and had breakfast on the way. We freshened up and went to visit Kanyakumari or Kumari Amman temple dedicated to Godess Parvati in the Kumari form who did penance to get married to Lord Shiva. The sparkling nose ring is believed to be visible even from the sea. Behind the temple is a huge market where people sell all kinds of memoirs and goodies.
From the temple we proceeded towards the Vivekananda Rock memorial for which we have to cross over to the island by a ferry. We had to stand for a couple of hours in the hot sun in the long winding queue but such efforts often pay off. So we finally got into the ferry and proceeded towards the Vivekananda memorial. The monument constructed is dedicated to the great Swami Vivekananda who had meditated in this island. We have a prayer hall as well inside and one can meditate in solitude. Also there is a calendar giving us the timings of sunrise and sunset for the 365 days. 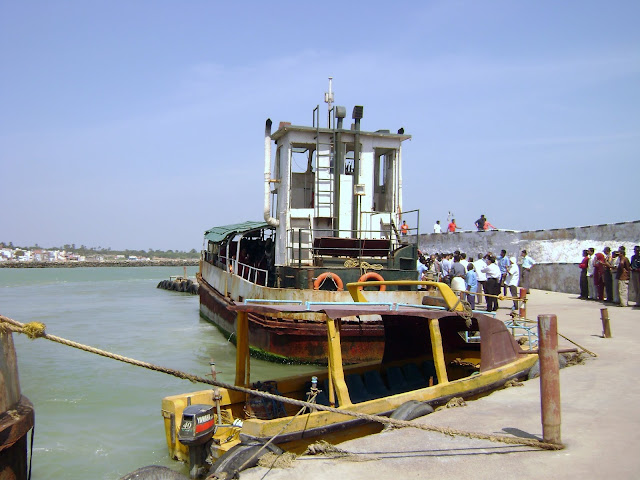 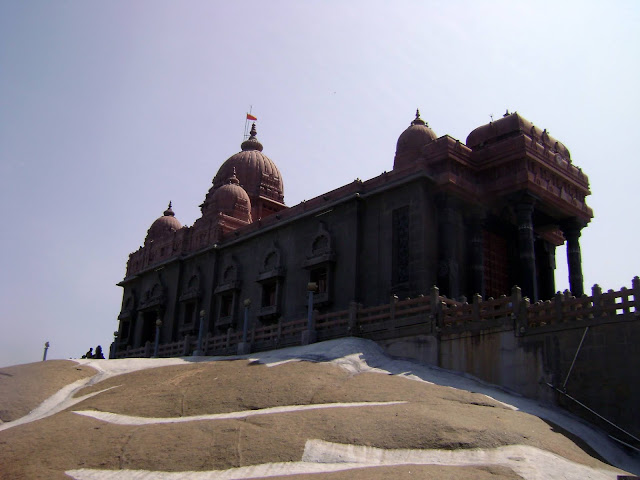 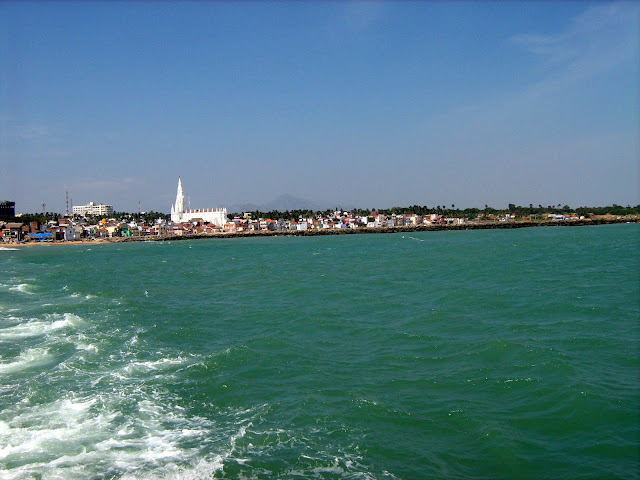 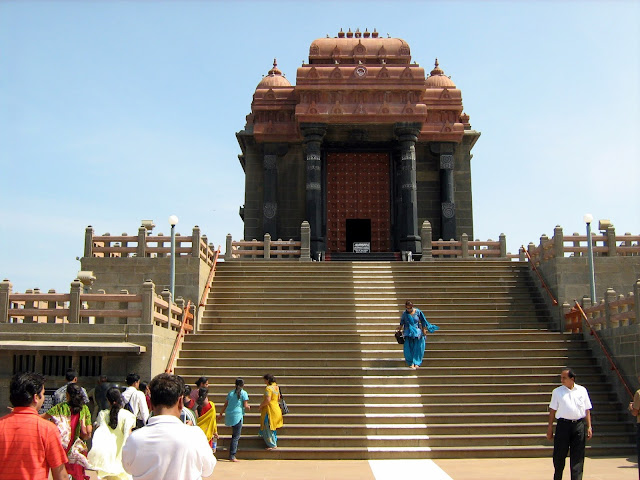 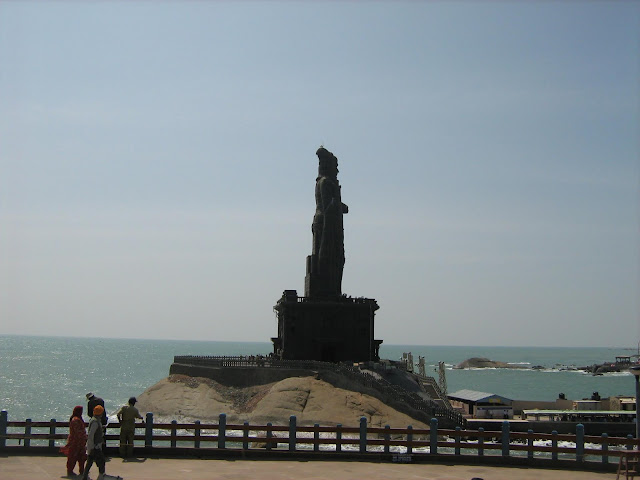 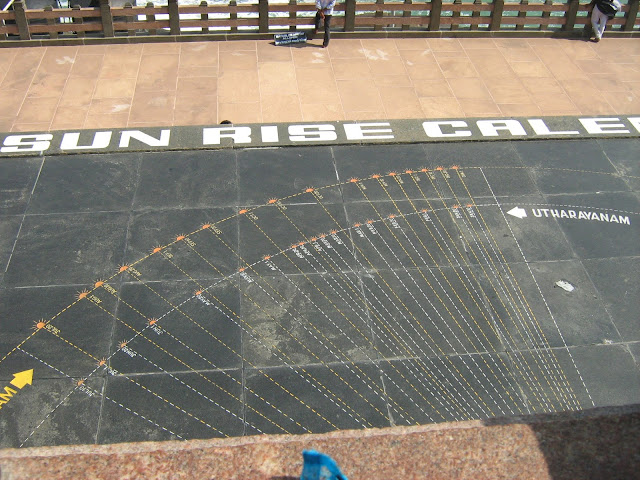 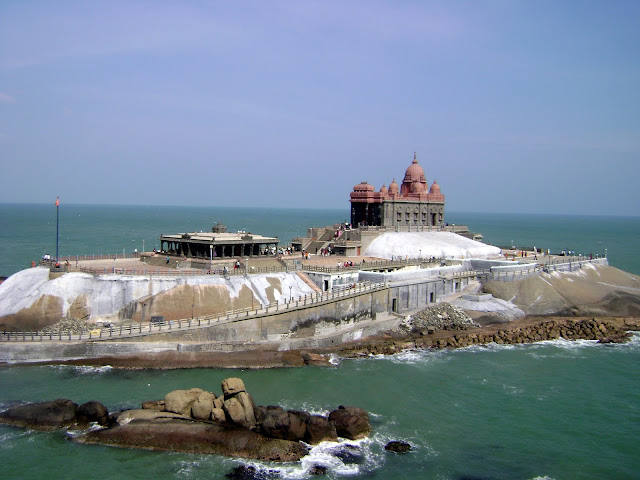 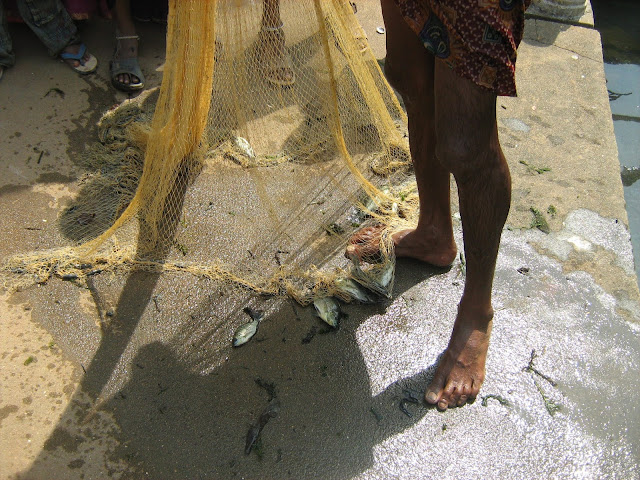 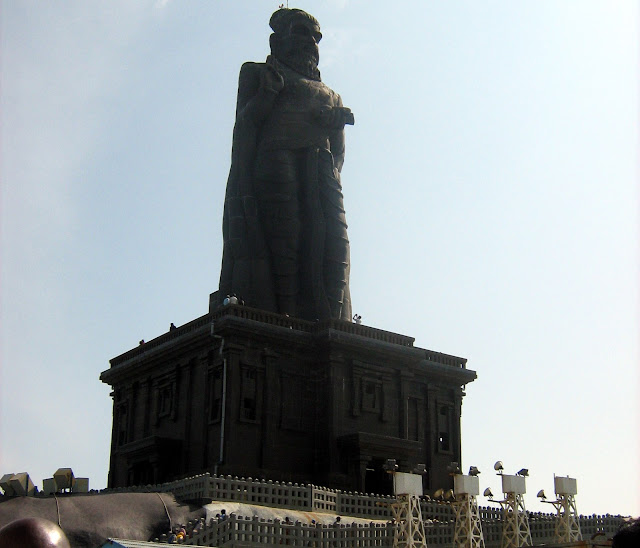 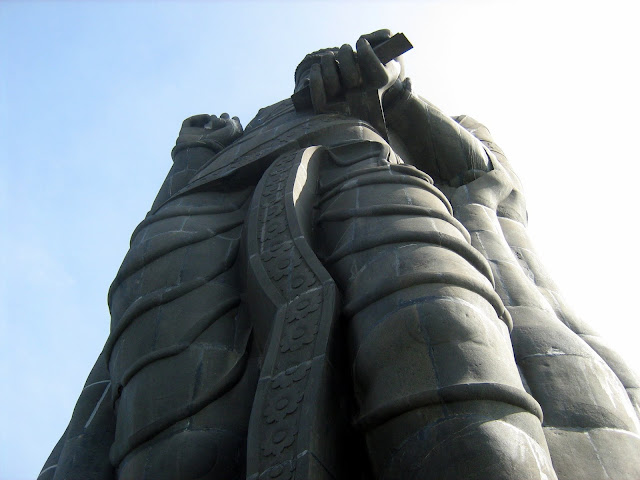 After the enriching experience of the two rock islands, we headed back towards the mainland. There we spent an hour shopping and roaming around the streets. Then later along with the crowd we gathered to witness the golden sunset at the Sangamam. It is the place where the Arabian Sea, the Bay of Bengal and the Indian ocean meet. we saw that magical place. The sun also signed off for the day at around 6:30pm. After the sunset we came back for dinner. 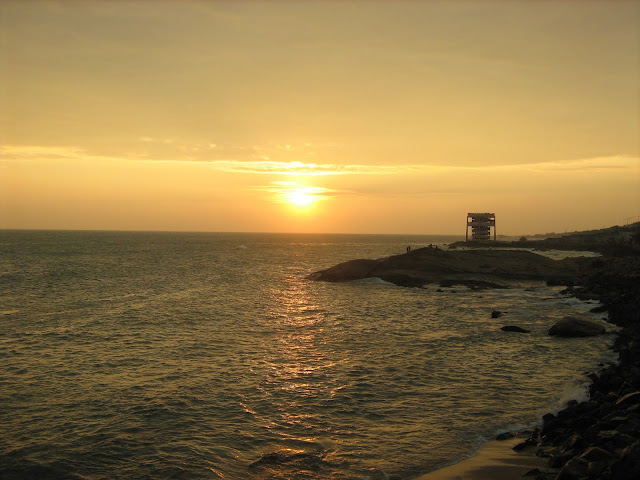 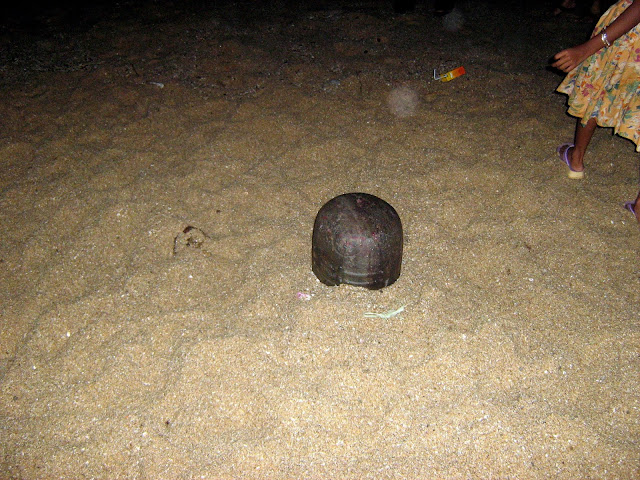 Day 4: We took the early morning train from Nagarcoil to Bangalore and being a cloudy day, we enjoyed the scenic views across the villages of Tamil Nadu. We reached Bangalore at 8pm in the evening. 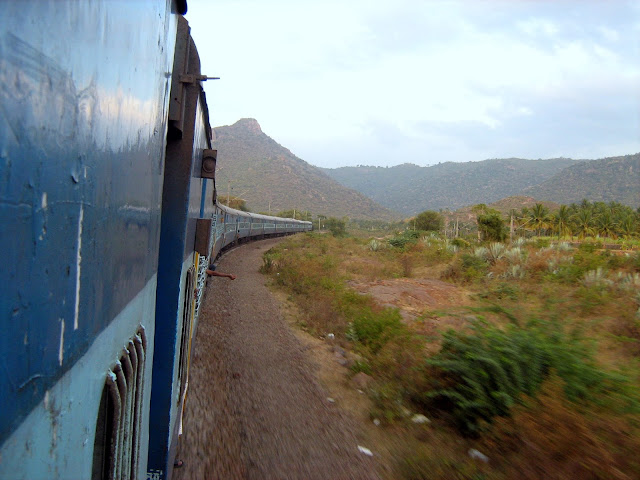 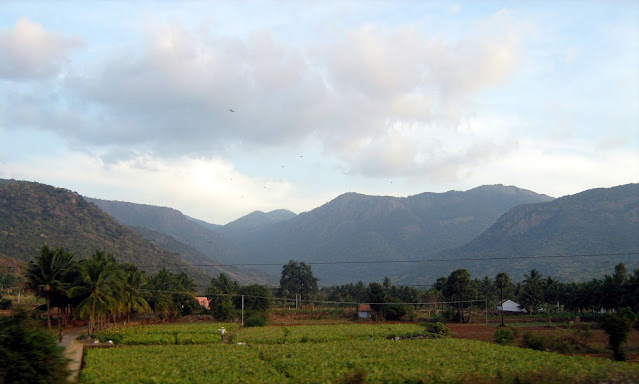 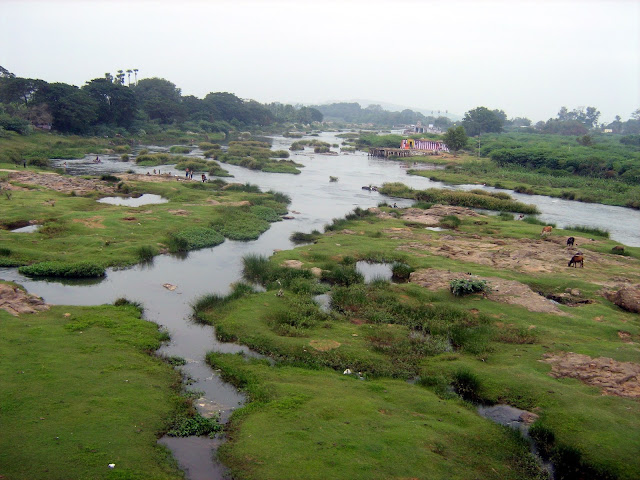 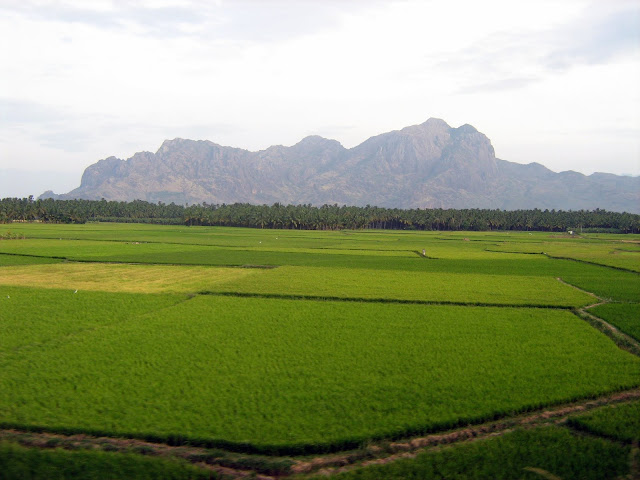 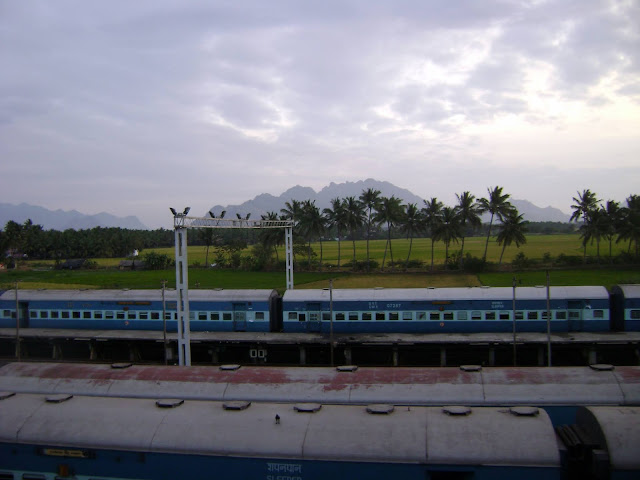 How to reach: Bus: KSRTC(Karnataka & Kerala) buses and also several private buses from Kalasipalayam ply regularly from Bangalore to Trivandrum and Kanniyakumari.
By Train: Train No.16526 Island Express leaves Bangalore at 21:40 and reaches Kanniyakumari via Trivandrum the following day at 19:00.
By flight: The nearest airport is Trivandrum which is 80 kms away.
By Bike/Car: Take the NH7 which connects Bangalore to Kanniyakumari via Salem, Erode, Dindigul and Nagercoil.
Food/Accommodation: Many hotels are available at Kanniyakumari which suit all budgets. But its always better to book in advance to be on the safer side.
References:
http://en.wikipedia.org/wiki/Suchindram
http://en.wikipedia.org/wiki/Kanyakumari
Map:
View Larger Map
Arabian Sea Bay of Bengal Beaches Kanyakumari Suchindram Sunrise Sunset Tamil Nadu Temples