Overview: Bangalore has almost all kind of places in its vicinity. One such place is the Maidenahalli Blackbuck sanctuary, which is around 140 kms from Bangalore. Situated in Tumkur District, this is the second largest Blackbuck area in this region after Ranebennur Blackbuck sanctuary. Given the route and the long distance, we decided to leave Bangalore early to avoid mid-day sun. Tumkur road was at its best with wide roads. We had our breakfast near Nijagal at Kamat Upachar. We reached Dobaspet pretty quickly and took the right turn towards Madhugiri. The road traverses through many places of tourist interest like Devarayanadurga, Goravanahalli, Siddarabetta and Madhugiri. On entering Madhugiri town, we asked a few locals about the route to the sanctuary. After some 4 kms, we came across a mud road towards the right side which leads to Maidenahalli. In no time we reached the entrance of the Maidenahalli Blackbuck Reserve which is now called Jayamangali Blackbuck reserve.
We were lucky enough to spot a couple of Blackbucks at the entrance. One of our friends was on his motorcycle so the Blackbucks ran away due to the sound made by the bike. Its always good to maintain some distance from the beautiful creatures so that they don't get scared. On moving a couple of meters inside the reserve, we could see a vast area of grasslands which looked straight out of Discovery channel. The grasslands resembled some of the areas in Africa. There was an Inspection Bungalow where we parked our vehicles. The caretaker told that there is a provision for accommodation as well if booked in advance. There is a kitchen as well which can be used by the occupants to cook food as well. We decided to freshen up there and then started our Blackbuck hunting with cameras. 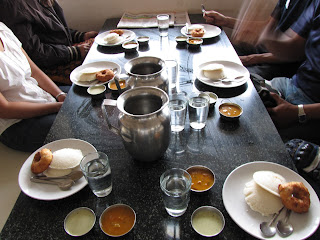 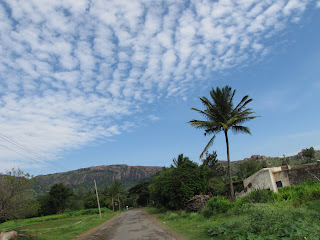 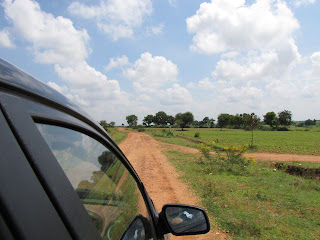 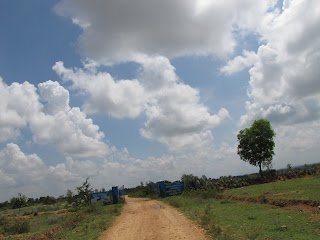 There was a watch tower and we could see the entire grasslands from there. We missed out on binoculars which could have been handy here. We saw a couple of moving objects at a distance and decided to head towards that direction. Finally success for us, we saw a herd of Blackbucks at a distance. We advanced slowly towards them with our cameras hiding behind the bushes. Managed to capture a few pics but they are very quick to sense us and dispersed in no time. This happened several times but we managed to get some decent shots as well. There were deer as well along with Blackbucks in the grasslands. We waited till they vanished from our sight into the deep jungles. 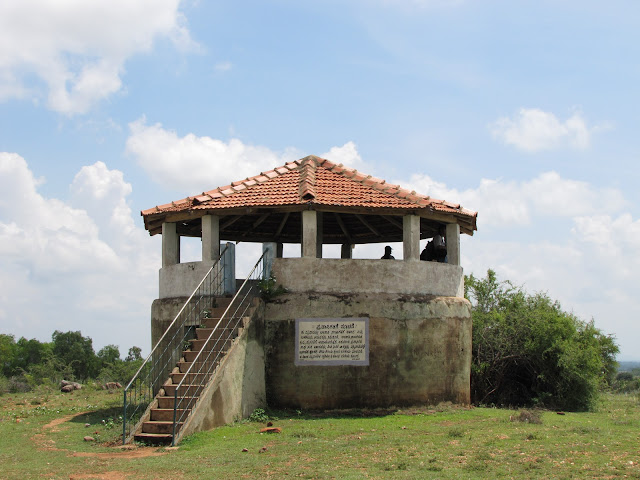 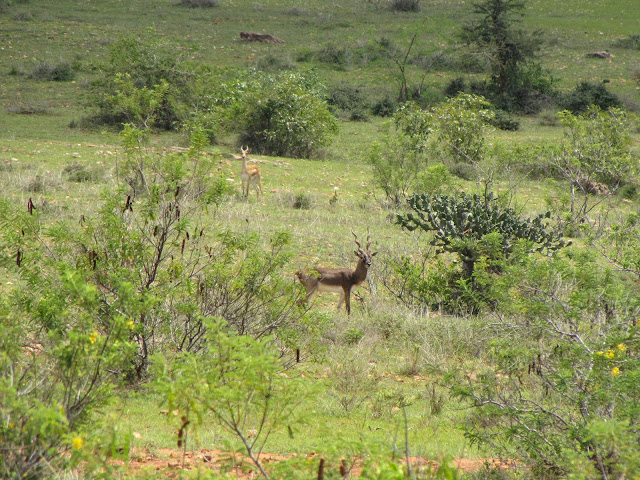 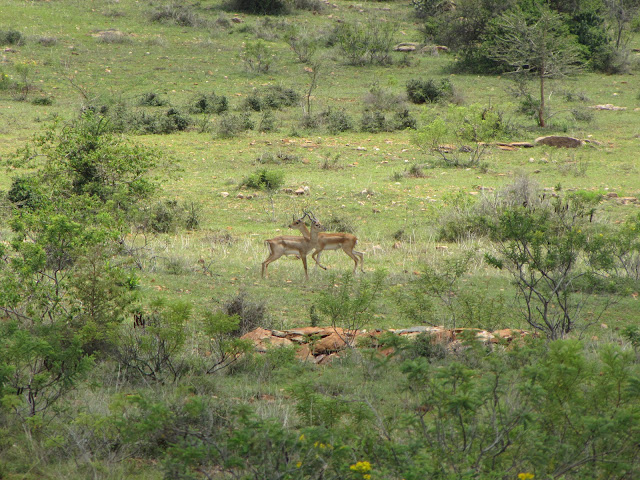 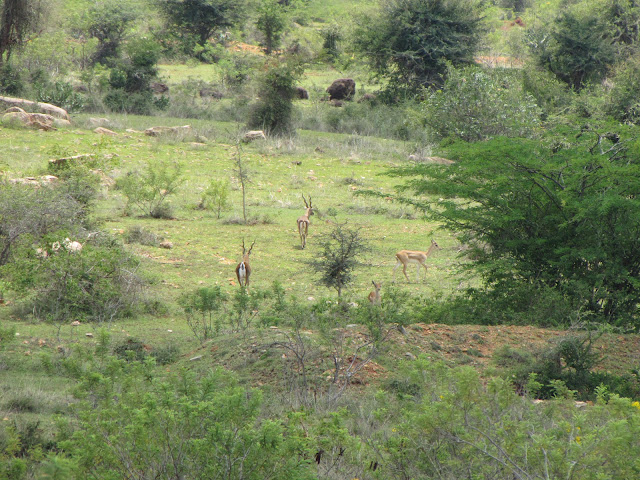 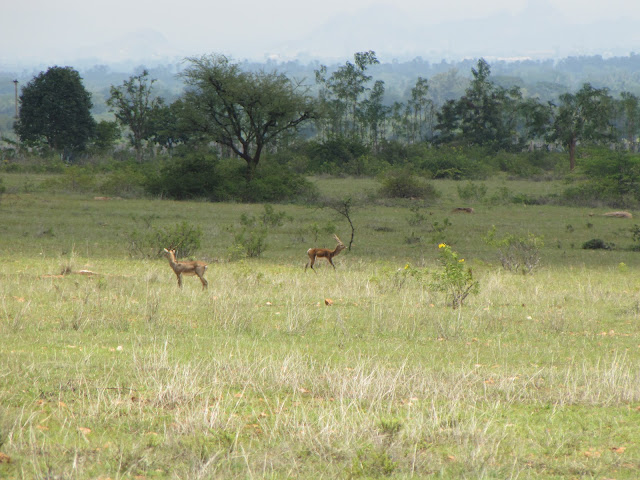 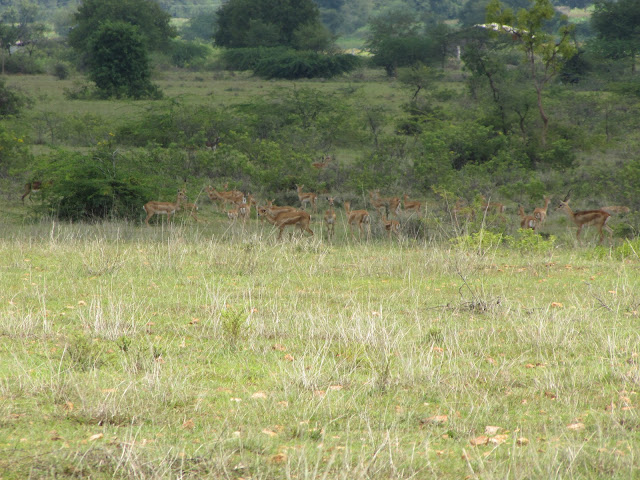 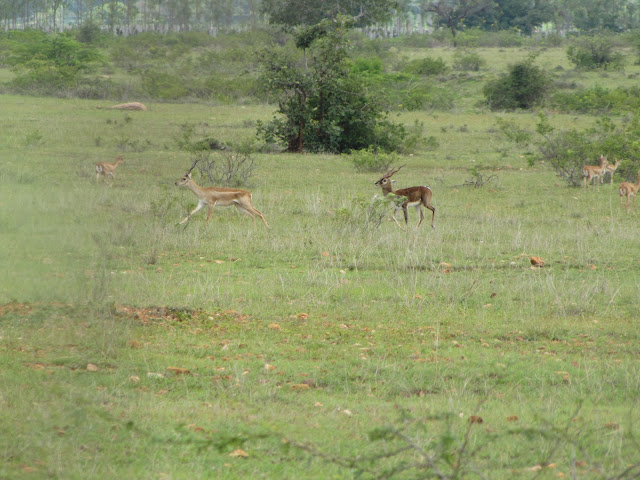 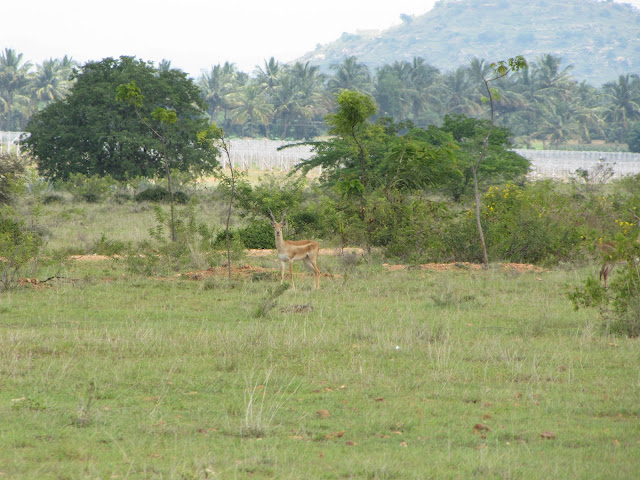 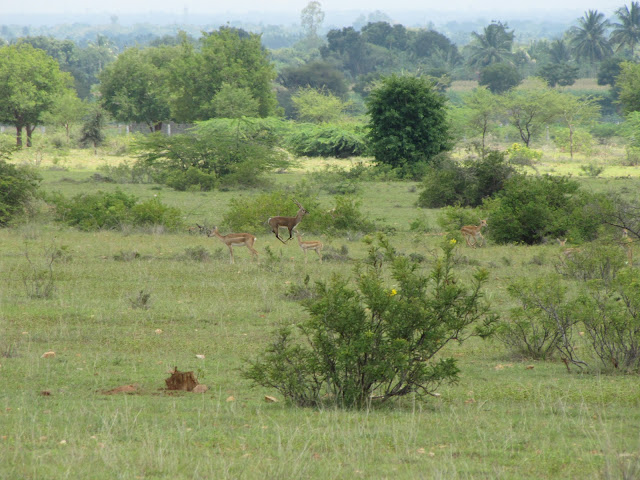 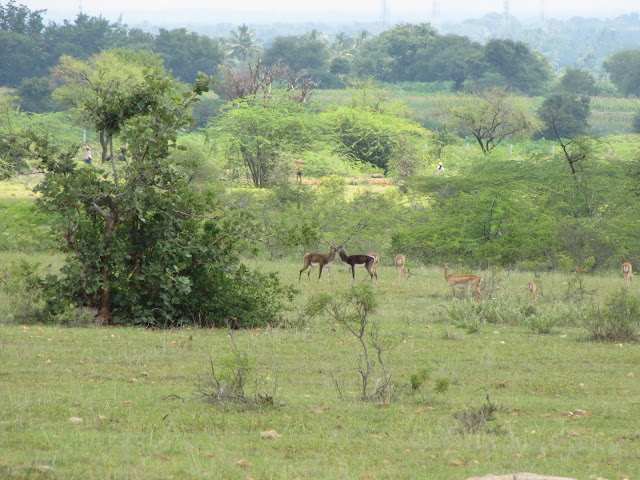 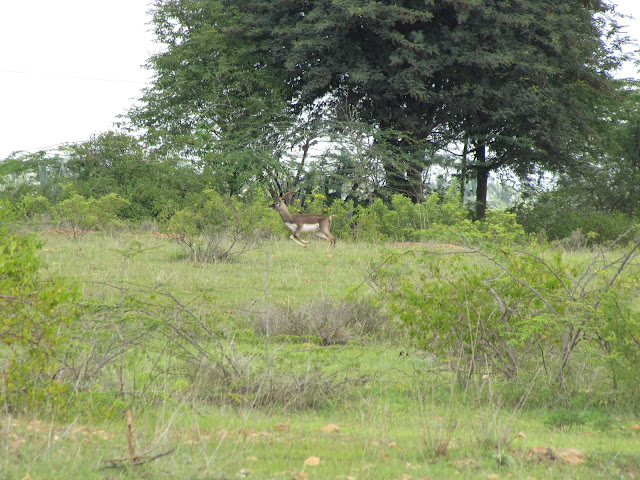 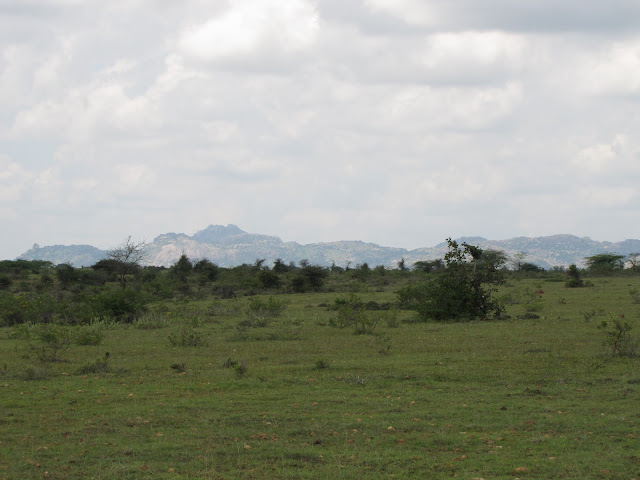 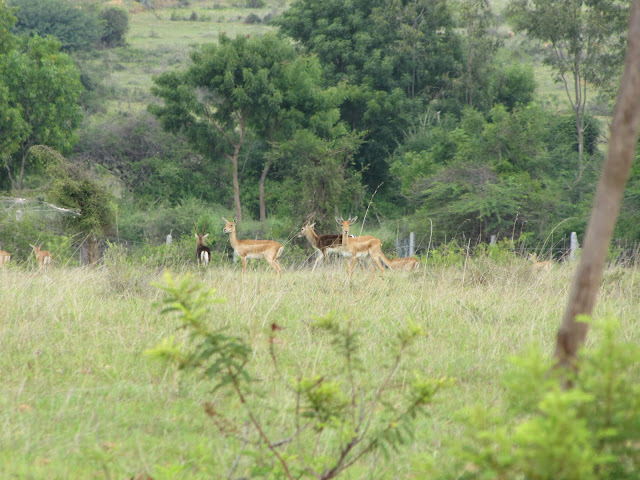 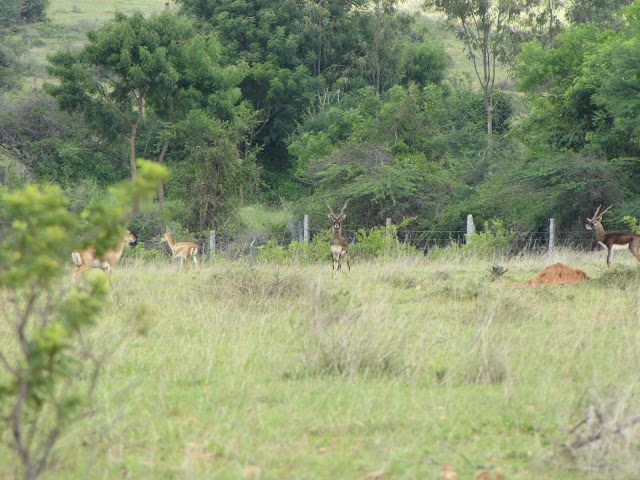 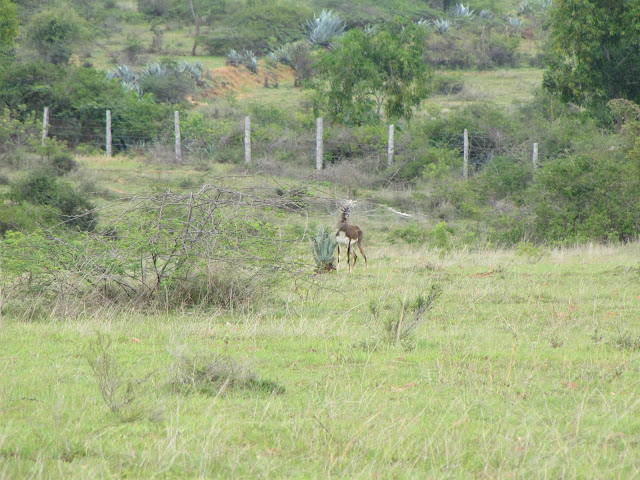 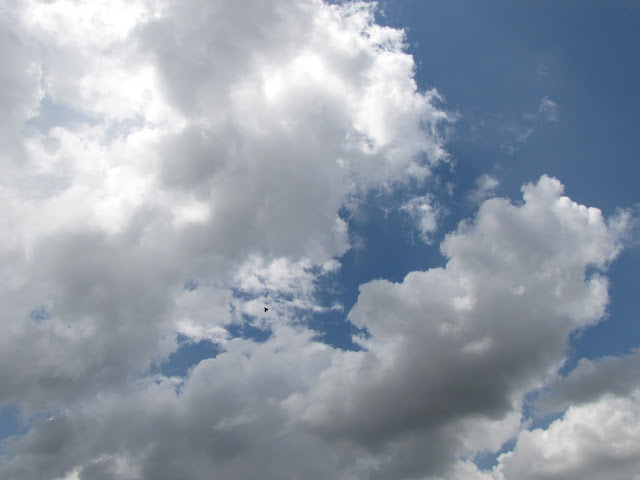 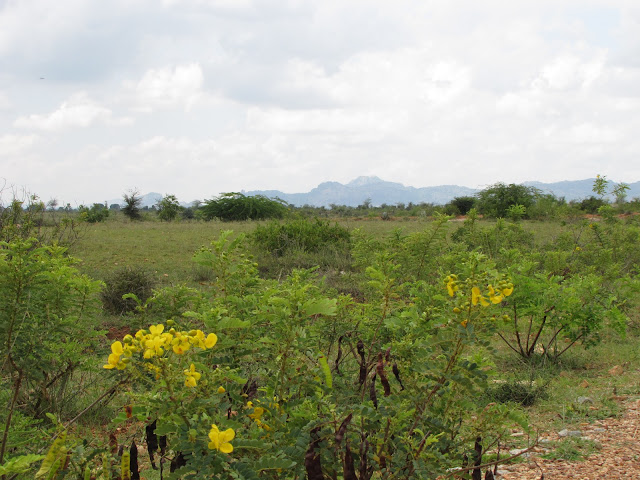 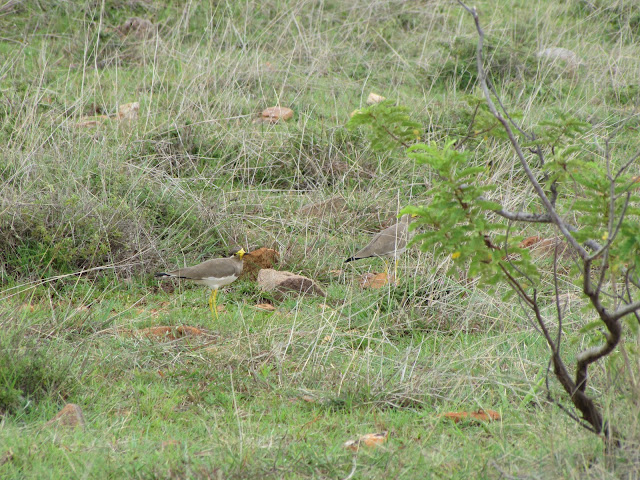 We decided to return back as dark clouds started looming over us and there were chances of rain. We started from there and had our lunch at Madhugiri at a very small restaurant. We decided to wind up for the day after lunch.
Its better to avoid visiting during summers and when it is too sunny as its difficult to spot Blackbucks in hot weather. Best time is early mornings, evenings and cloudy days.
How to reach: By own vehicle- NH4 till Dobaspet. At Dobaspet turn left towards Madhugiri. Maidenahalli(Jayamangali) is around 25 kms from Madhugiri.
By public transport: Direct buses ply from Bangalore to Madhugiri. From Madhugiri board any bus heading towards Gouribidanur.  The bus will stop near the mud road on the right side from where we have to manage by walking to the reserve.
Food/Accommodation: Better to carry own food from home. Else there are options only on Tumkur road.
Reference: http://en.wikipedia.org/wiki/Maidenahalli_Blackbuck_Reserve
Map: View Larger Map
Bangalore day trips Blackbucks Camping Jayamangali Karnataka Maidenahalli Photography Wildlife