Overview:
One of the toughest and dangerous rock climbing i have ever done in my life. Madhugiri fort, believed to be built by a local chieftain Raja Hire Gowda and later renovated by Hyder Ali, is built on the hill and does look like a miniature version of the Great Wall of China. There is an interesting story behind this as well. Please check the reference website mentioned below for details.
Having no fair idea of the distance, we set off towards Madhugiri from Bangalore at 6am by bike on a cloudy Sunday morning. Tumkur road wore a deserted look early morning and it was foggy as well. We decided to cover as much distance as possible before the sun rises overhead. We crossed Dobaspet and entered Koratagere. By this time we had covered close to 100 kms and realised that it is a bit too far for biking. We had our breakfast at Koratagere at a simple tea shop.
After gathering some energy we continued towards Madhugiri. There was a small lake enroute where we decided to relax for a while. The roads are in a pretty bad shape and the private buses on the road made it worse to ride a bike. Finally we saw a Karnataka tourism board saying Madhugiri 7 kms. We reached Madhugiri town in a few minutes and at the entrance there is a huge board on Madhugiri fort. 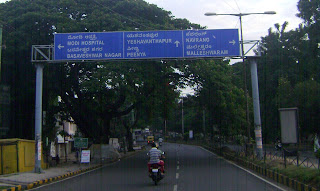 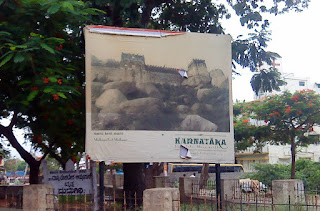 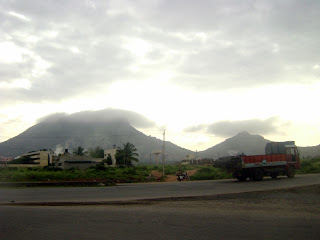 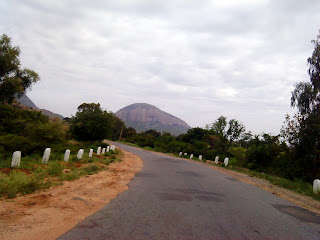 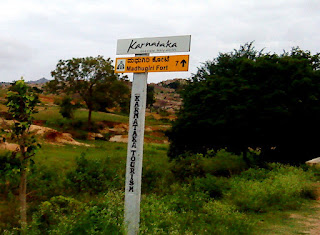 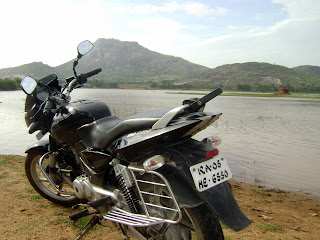 We entered inside the fort area and parked the bike near at the base. Madhugiri hill is believed to be the largest monolith in Asia. We started climbing the rocks. Initially the climb looked fairly easy with well laid steps. There is a solid wall throughout the ascent. We saw a big storage area carved out of rock supposedly used to store grains. We advanced a little further and the climb began more and more challenging. At one point the climb is so steep and there are iron bars installed at regular intervals so that climbers can hold them for support. But some bars were missing for a few meters and we had a horrid time crossing with more than 60 degrees steep and it was a bit slippery as well. We removed our footwear for better grip and started crawling at snail's pace. The moment we crossed that particular stage we thought that we have accomplished the most difficult part. We kept on climbing and every time we reached a point where it seemed to be the top, there was another checkpoint visible at the top. We encountered several checkpoints and the climb was very tough and tiring. The clouds had vanished and the sun was beating down on us. Finally, we saw some signs of the summit as we saw a gateway to some ruins. We held tightly to the walls for support and completed the final leg of our ascent and were happy to see the ruins at the top. It was a great feeling having accomplished something which many people don't usually do. The entire town of Madhugiri and the surrounding villages could be seen from the top. 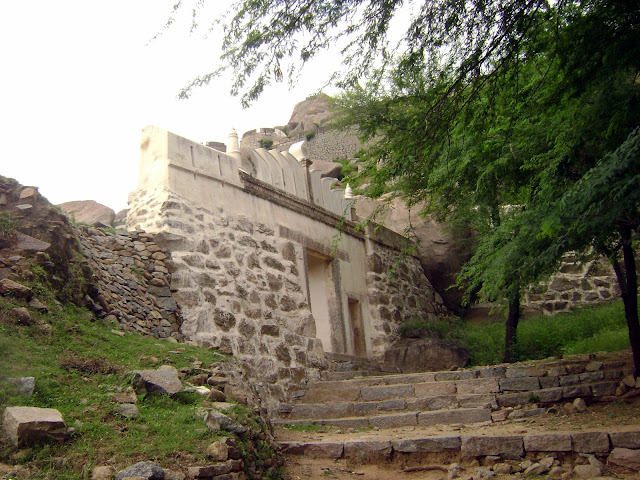 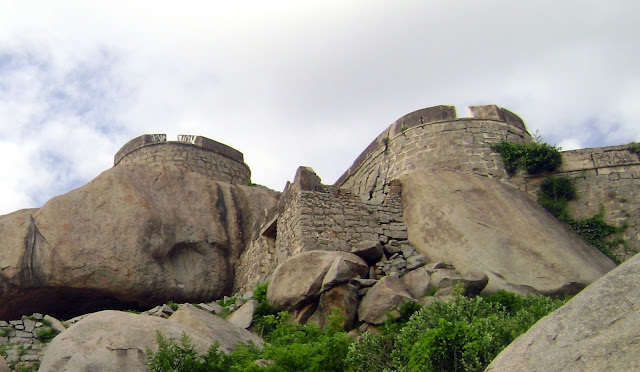 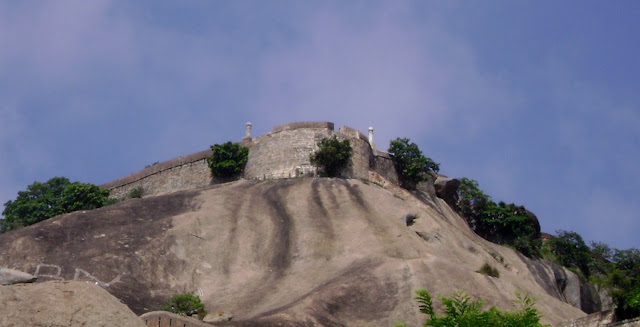 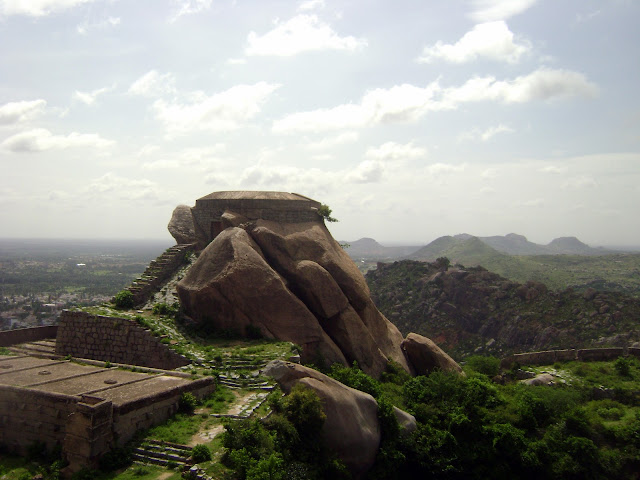 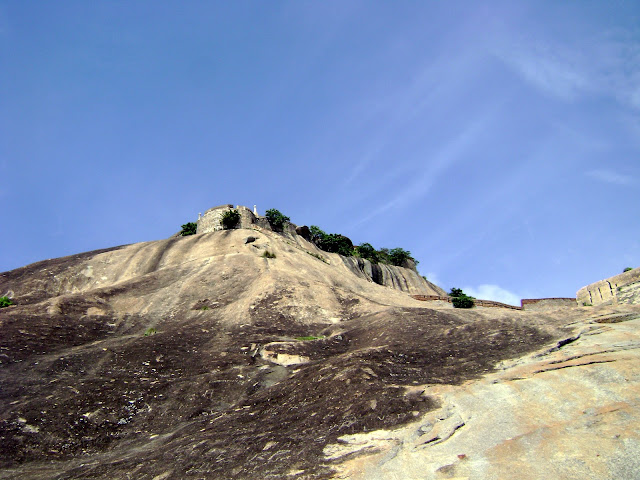 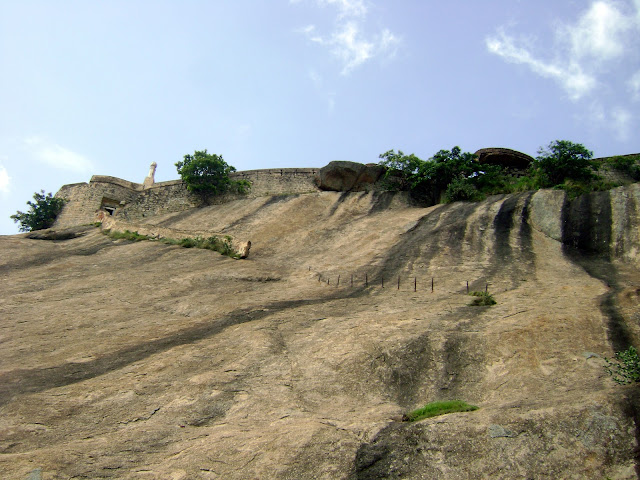 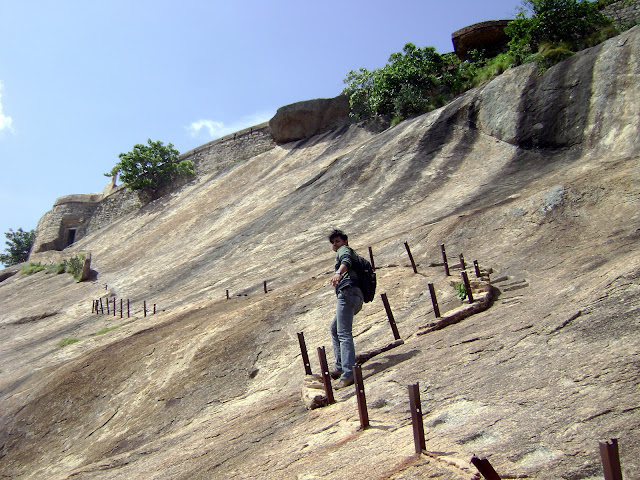 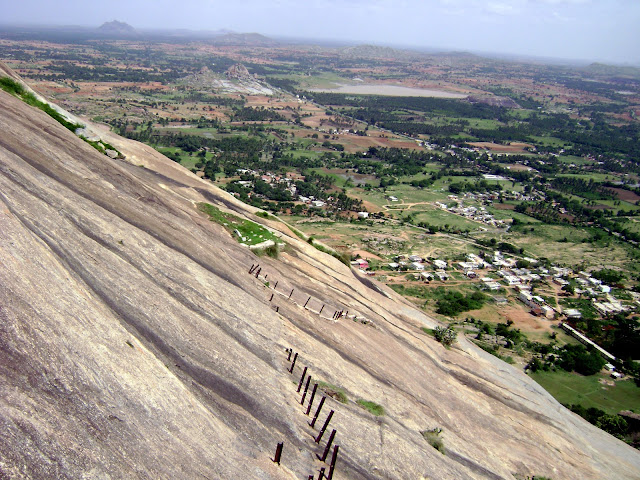 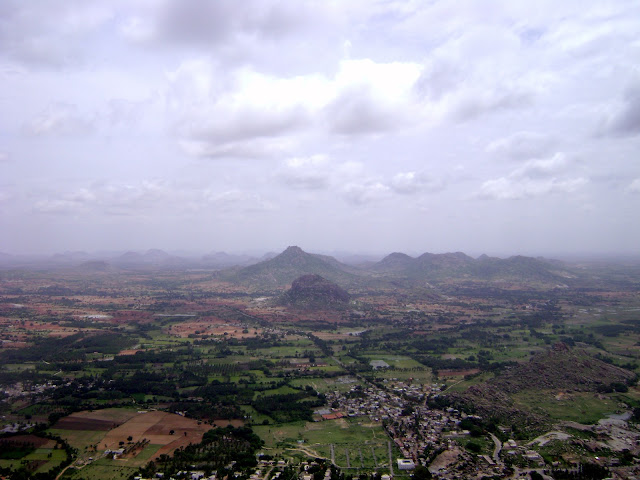 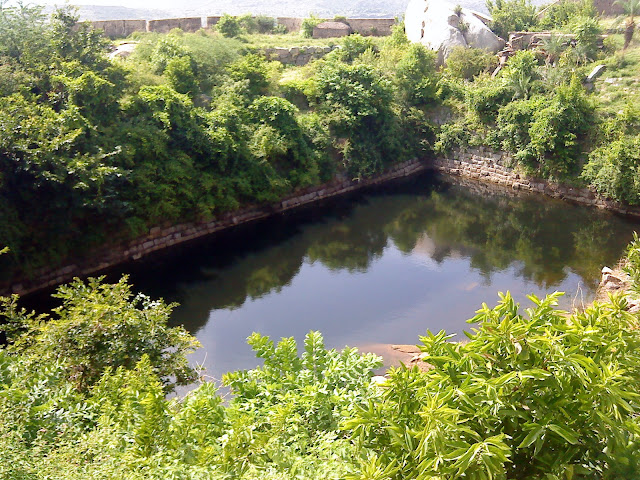 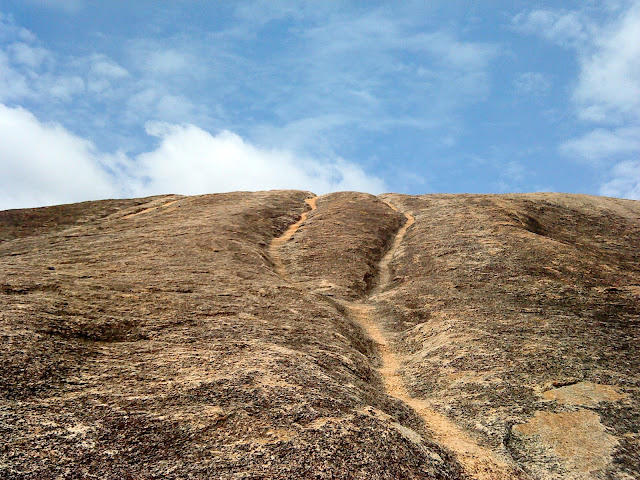 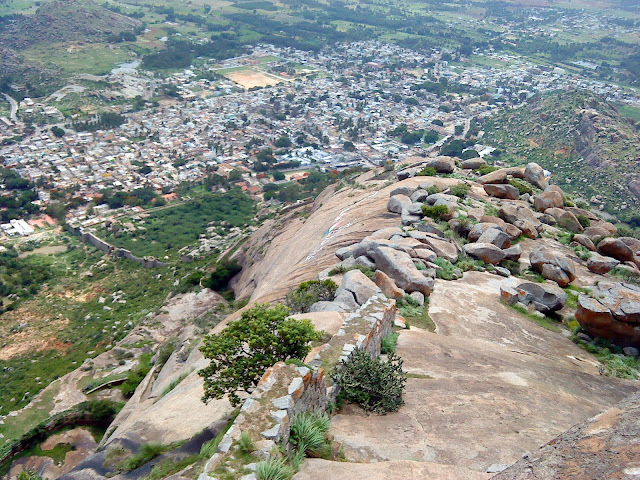 The story doesn't end at this. We started our descent hoping that climbing down would be fairly easier. But as it was slippery we had to literally sit and crawl down. To add to our woes, we lost our way in the middle, there was plain rock with great degree of slope and we didn't have an idea which direction to take. One wrong step could lead us rolling down several miles below which was not even visible. We sat down there in this hopeless situation. Fortunately, we saw some villagers climbing up the hill. They guided us on the route to climb down. We were back on track and we completed our rock climbing feeling proud of ourselves.
It took a total of 2.5 hrs to climb the hill and around 1.5 hrs to get down. As it was a sunny day so we were a bit exhausted. We decided to relax a bit by the lake some 5 kms from Madhugiri. It helped us a lot and we continued our return trip. As it was only 12:30 in the afternoon, we decided to head back home for lunch. 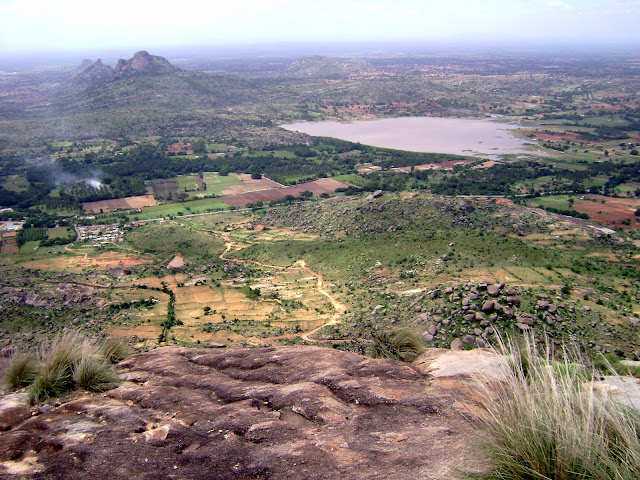 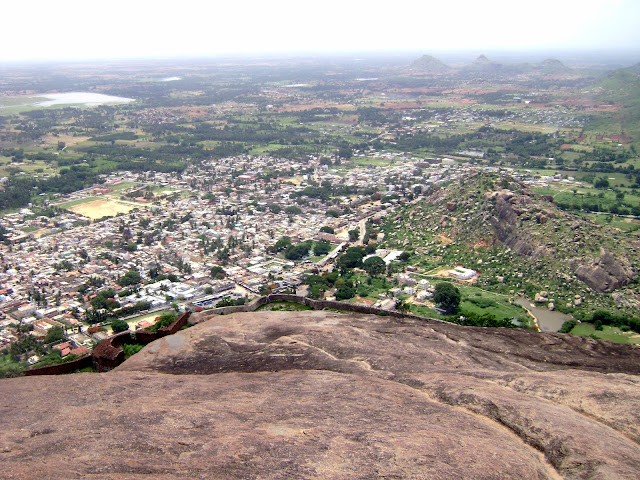 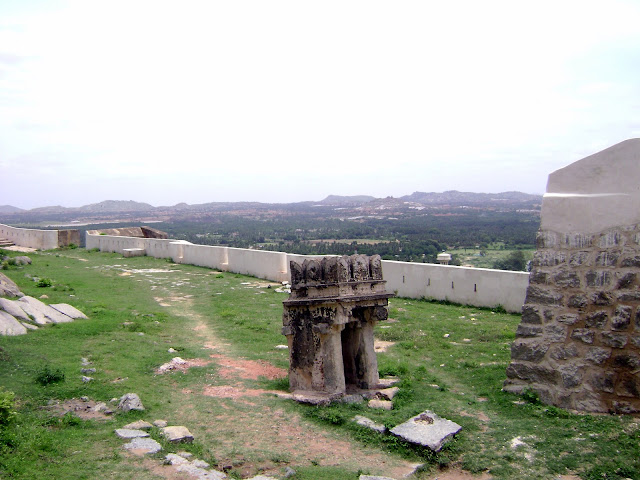 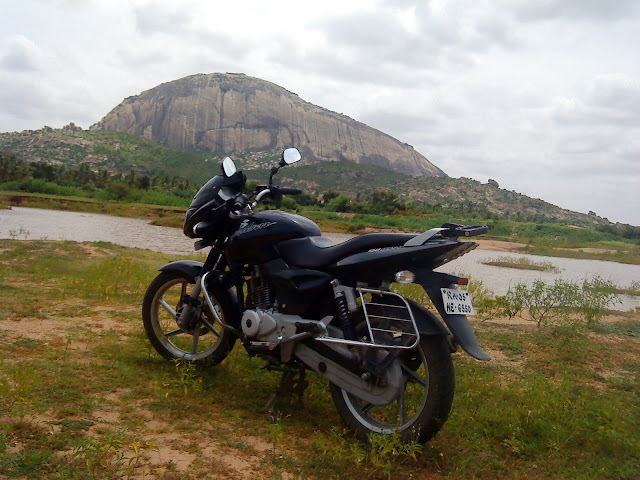 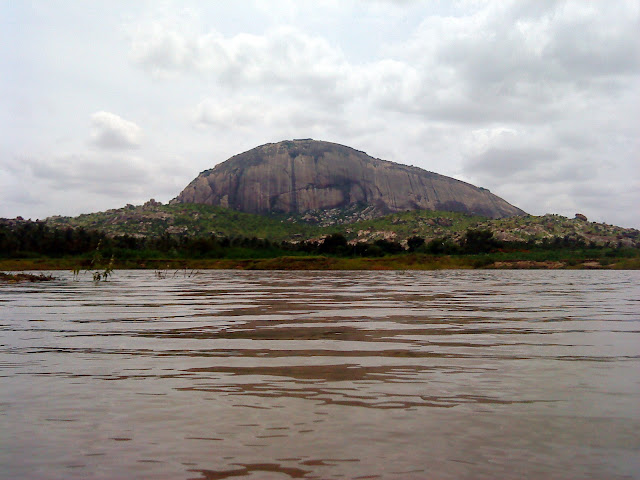 How to reach: Start from NH4 towards Tumkur, at Dobaspet, go below the flyover and turn right towards Goravanahalli and Devarayanadurga, continue on that stretch till the end, at the end of the road, turn right towards Madhugiri.
Regular bus services available from Bangalore to Madhugiri departing from Kalasipalayam and Majestic.
Reference: http://en.wikipedia.org/wiki/Madhugiri
Map: View Larger Map
Adventure Biking Hill Fort Karnataka Madhugiri Rock Climbing Trekking