This Post is a part of the Chalukya Trail. Please Click here to read the main post
Overview: After visiting Gadag we proceeded towards Lakkundi, around 8kms from Gadag. On reaching Lakkundi, we saw a big Heritage center built inside an old temple. We discovered that there are several temples built by the Chalukyas in ruins inside Lakkundi. We went to Brahma Jinalaya (Basadi), Kashivishvanatha Temple, Nanneshwara Temple and Manikesvara Temple.
Beahma Jinalaya was built in 1007 AD by Attiyabbe, wife of Chief Nagadeva. Built in South Indian Dravida architecture, an unusual feature of this temple is the second functional smaller sanctum over the ground floor sanctum.
The next was Kashivishwanatha temple where a small surya shrine faces the main shrine on the west. The temple is built in Nagara style of architecture with intricate carvings.
Nanneshwara Temple is another example of Chalukya craftsmanship. It is much similar to the Kashivishveshwara temple.
Manikeshwara temple is one of the prime attractions in Lakkundi with its stepped well or Kalyani. The temple is dedicated to Shiva with carved doorways. The kalyani next to it is called muskin bhavi which looks terrific from the top. The water can be collected by reaching the base of the well using a series of steps in any direction. This type of a kalyani can also be seen at the Hoysala temple in Hulikere. 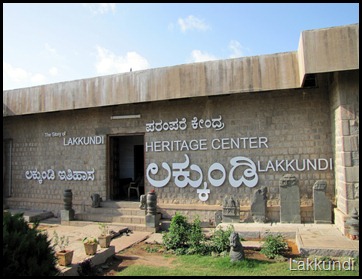 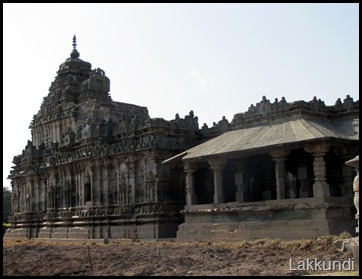 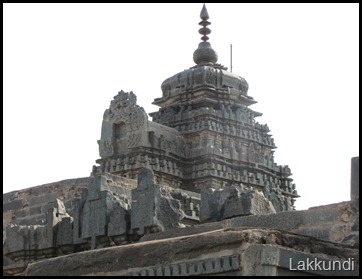 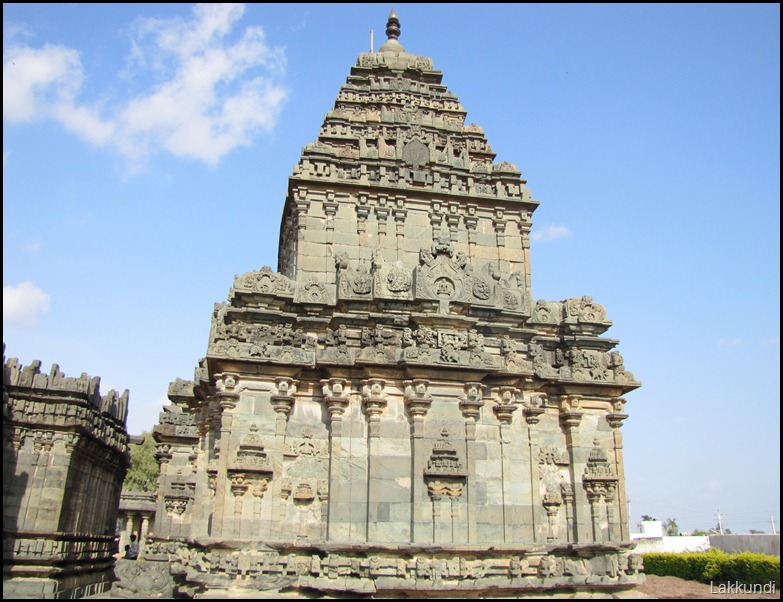 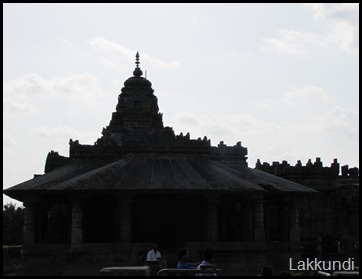 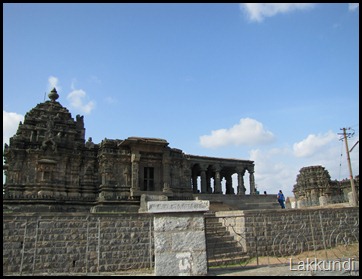 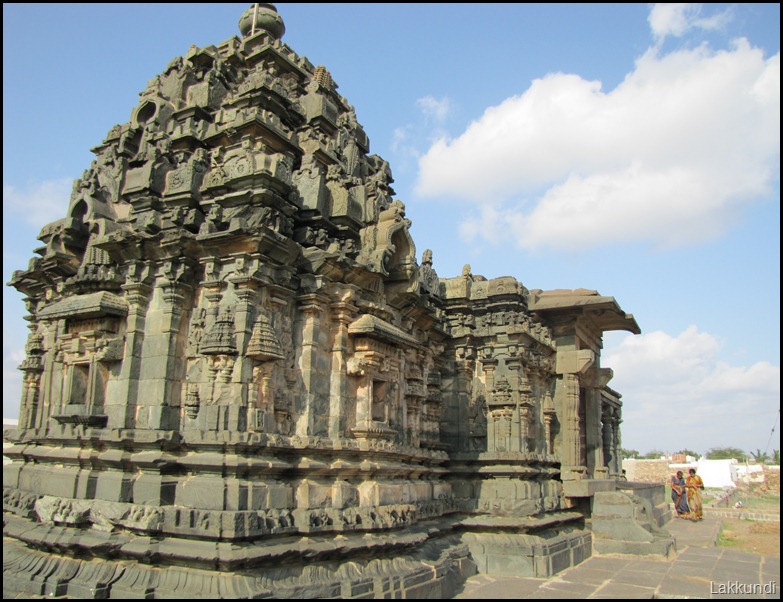 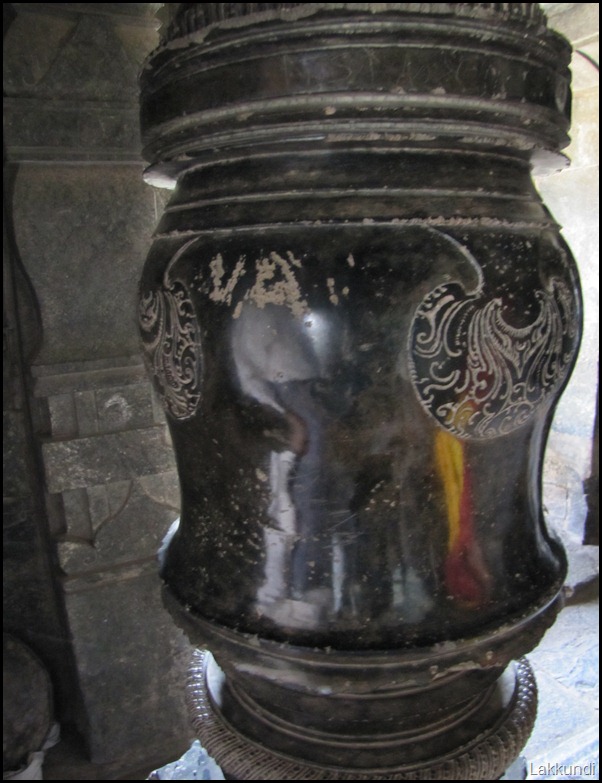 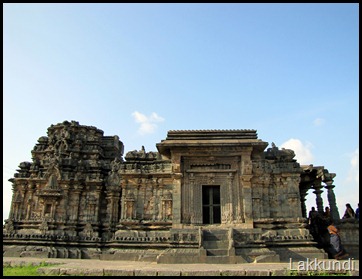 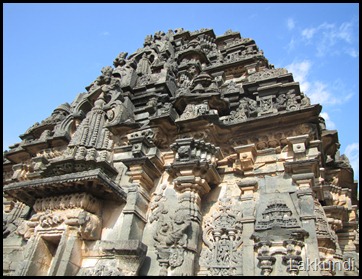 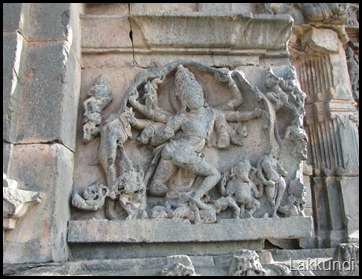 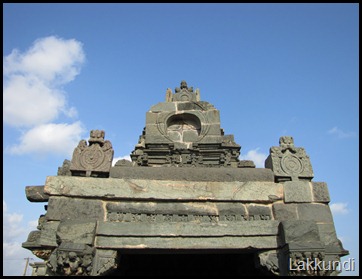 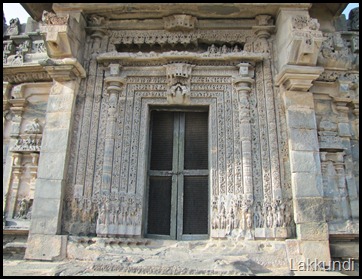 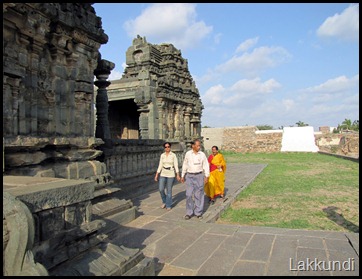 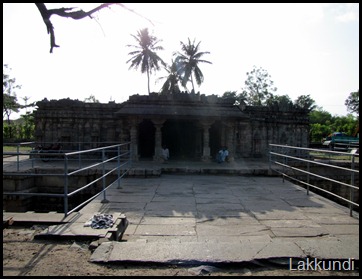 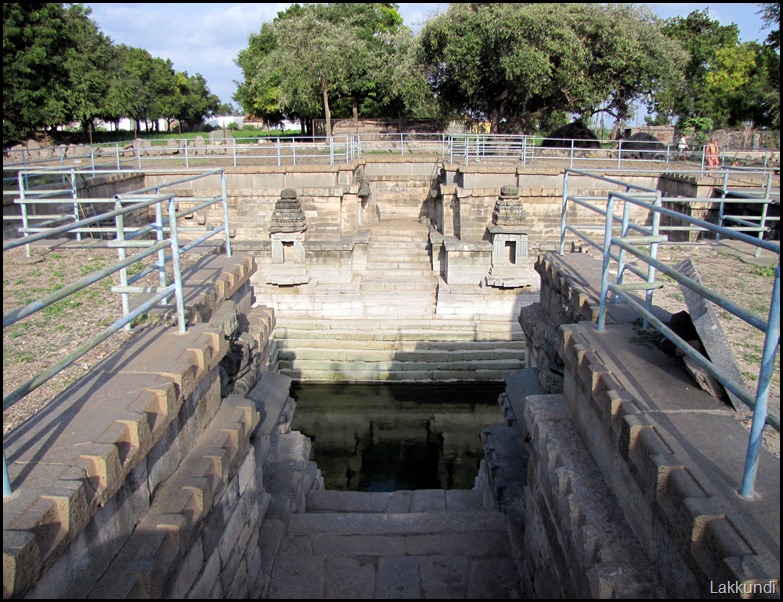 How to reach:  Bus: From Bangalore, there are many direct buses to Gadag. From Gadag, many buses and private vehicles ply to Lakkundi.
Car/Bike: From Davangere, head on NH4 towards Bankapura. At Bankapura cross, turn right to reach Gadag. From Gadag, travel for around 8 kms towards Koppal to reach Lakkundi.
Nearby places:
Kuknur & Itagi: Both Kuknur and Itagi house lot of ancient remains of Chalukya temples. Mahadeva temple at Itagi is a mix of Nagara and Dravidian style of architecture. We missed out on these places due to lack of time. Below is a pic from Itagi (Courtesy Wikipedia)  http://en.wikipedia.org/wiki/Mahadeva_Temple,_Itagi 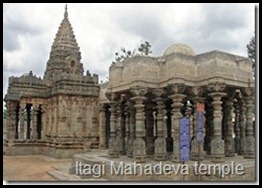 Overview: Domlur, a flourishing village during the Cholas, is now in the hub of modern Bangalore. With MG Road, Indiranagar, HAL airport road in the vicinity, this is one of the most popular areas of Bangalore. Chokkanatheshwara temple in Domlur is one of the oldest temples in Bangalore, built in the 10th century. According to the inscriptions found in this temple, Domlur is referred to as ‘Tombalur’ talking about grants offered to the temple. Some records mention the name of the place as 'Desi Mannika Pattnam'. The temple was initially built by the Cholas and later renovated by the Hoysalas and Vijayanagara rulers. One inscription from 1440 CE mentions about the tolls from Sondekoppa village being granted to this temple. Two more earlier inscriptions indicate grants from Karadihalli and Sunkenahalli (Hanumanthanagar). There is one Anjaneyaswamy temple a few metres from the Chokkanathaswamy temple, dating back to the Vijayanagara times. It is believed that the head of Anjaneya…
Read more

Overview: Killing time for 4 days on a long weekend was definitely not going well with me. So suddenly decided to make some quick travel plans. Being brought up in Chandigarh for over 20 years, I wanted to refresh my childhood memories with my wife and moreover she had not been to North India. With all resorts booked around Bangalore and no bus reservations available, we decided to take a plunge on the long distance route. My wife, being a tatkal reservation expert :), booked tickets from Bangalore to Delhi for 25th Dec, and the return trip by flight from Delhi to Bangalore for 4th Jan. My job was to fill the itinerary between these days.
I wanted to cover as many places as possible, chalked out a plan for that. Below are the details of the trip:
Day 0-2: We had to catch the 12649 Sampark Kranti express from Yesvantpur at 22:10 hrs on 25th Dec. Luckily we got the tatkal reservation done, thanks to my wife for that. The train took around 36 hours to reach H.Nizamuddin station passing thr…
Read more