Sirsi, Karnataka: Heritage town in the midst of natural beauty

Overview:
Sirsi is a beautiful town in Uttara Kannada district of Karnataka, known for several tourist attractions around it. The main attraction in Sirsi town is the Marikamba temple, built in 1688. This temple is visited by several tourists everyday and every alternate year, the temple fair is held during which the town is flocked by people from the surrounding villages. 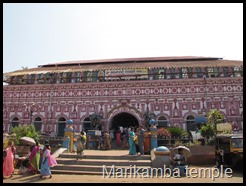 The history of the district goes back to the times of Kadambas, and the architecture of the Kadambas can be seen at Madhukeshwara temple in Banavasi, around 22 kms from Sirsi. (Read more in http://www.thelightbaggage.com/2011/07/walking-on-one-of-oldest-inhabited.html)
Another place of tourist attraction is a place called Sahsralinga, or place of several Shiva Lingas, around 17 kms from Sirsi. One can see thousands of Shivalingas, carved out of riverine rocks, along with the rock carving of the Nandi Bull along the river. More lingas are visible in the summer season when the level of water in the river recedes. These Lingas are believed to have been built in the 17th century by king Sadashivaraya. There is also a Cable bridge built across the river offering the visitors to get a birds eye view of Sahasralinga. 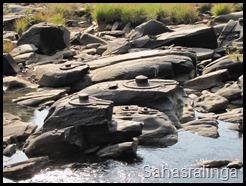 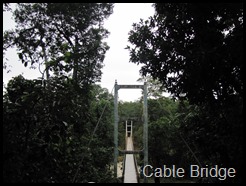 Near Sahasralinga is the majestic Magod falls, one of the several waterfalls in the region. Many of the falls are non-descript which emerge during the monsoons. Magod falls are formed when the river Bedti cascades from a height of over 200 feet. Proper steps and pathway have been built for the safety of the visitors to this waterfall. 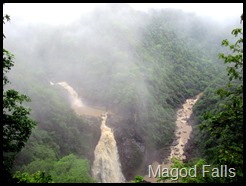 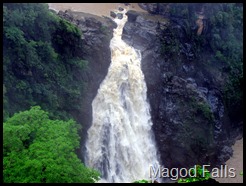 Sonda or Sodhe is a historic place near Sirsi which has a long history right from the pre-historic times, evident from the paintings and drawings discovered near Sonda, dating to 1st century BC. Sonda was later ruled by the Marathas under Sambhaji in the 17th century. Sonda is home to SriVadiraja Mutt, established in the 15th century by Sri Vadiraja. The temple complex has a small lake called Hayagriva Samudra, and also have a few temples dedicated to Lord Trivikrama and Lakshmi Devi. 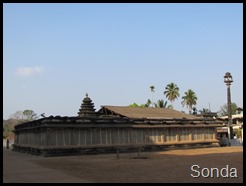 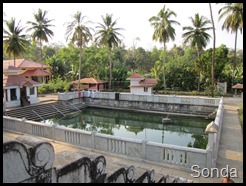