This Post is a part of the Chalukya Trail. Please Click here to read the main post
Overview: The Pattadakal Group of monuments near Badami is a UNESCO World heritage site. Located on the banks of the river Malaprabha in Bagalkote district, it highlights the architectural splendour of the Chalukyas. There are around 10 temples in the complex built in both Nagara style and Dravidian style and it is during this period when both styles were given final form. In the middle of the 7th century, the Chalukyas shifted their capital from Badami to Pattadakal. This was the place where several Chalukyan kings were crowned. The Mallikarjuna, Sangameshwara and the Virupaksha temple were built by the queens of Vikramaditya-II to commemorate his victory over the Pallavas of Kanchi in the 7th century. The Papanatha, Kashivishveshwara, Jambulinga and Galaganatha temple were built in North Indian style and can be compared to the Sun temple in Konark and other temples in North India like Varanasi and Gaya. Many temples were built at an experimental stage in this complex and upon more learning they graduated into building more perfect temples. 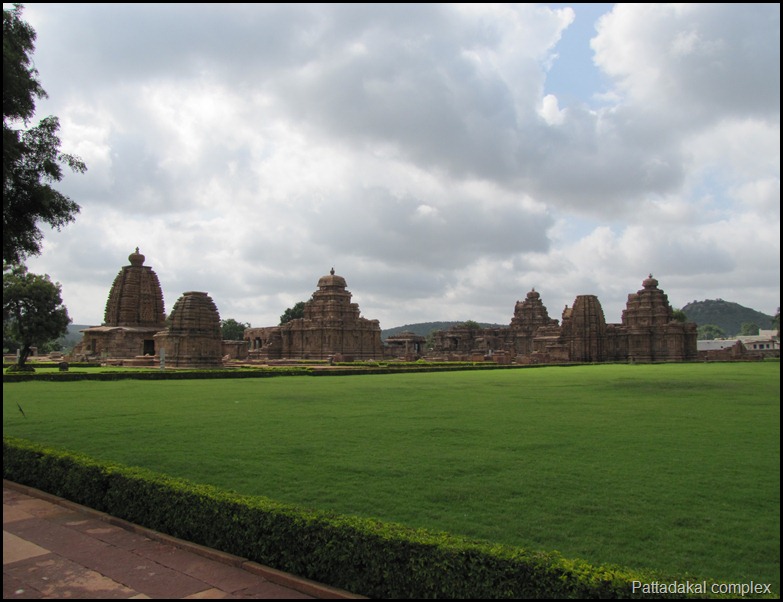 The first temple we visited was the Kadasiddheshwara temple which was probably one of their experiments. It has a rectangular mantap and is built on a high platform. 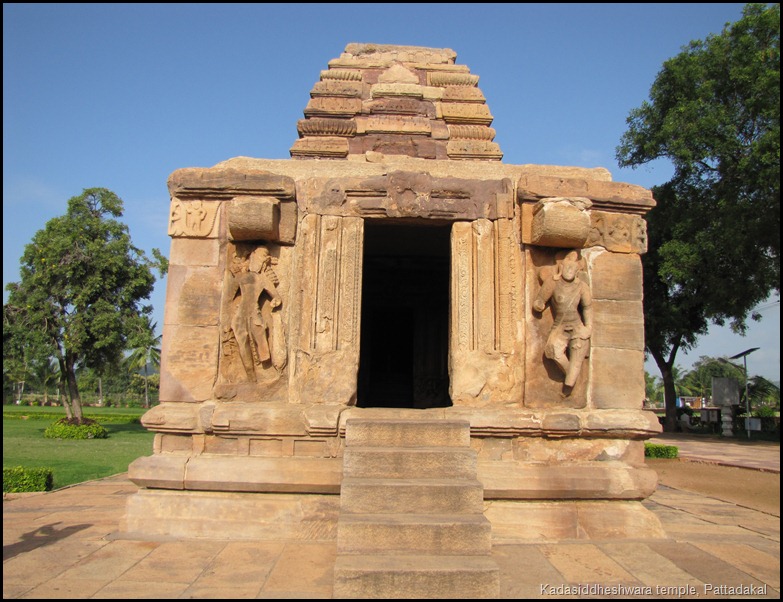 The next is the Jambulinga which is built in a similar fashion. It has a small rectangular tower. At the doorway we have the Nandi guarding the temple. 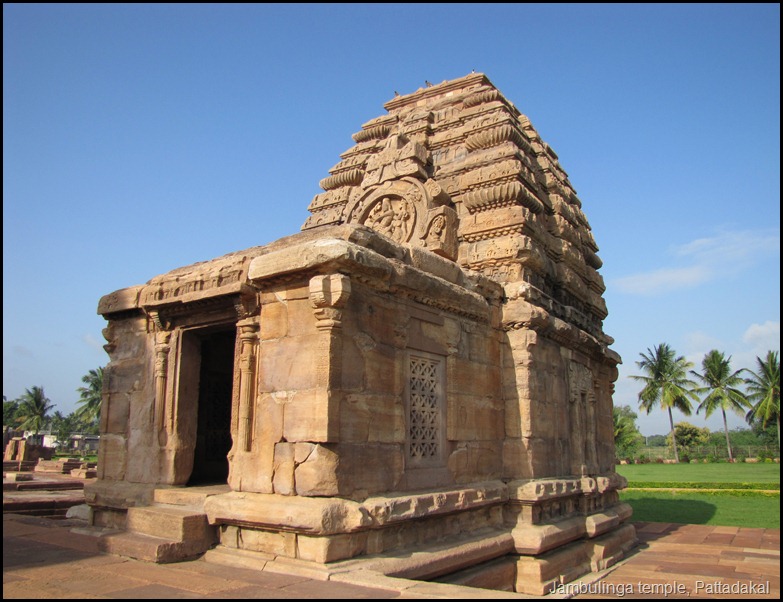 Next comes the Galaganatha temple, which dates back to 8th century with curivilinear shikhara. Its built in Nagara style of architecture with a slanting roof. The doors are well carved and has a dancing Shiva in the interiors. 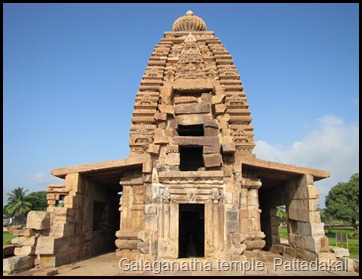 Sangameshwara temple was started under the king Vijayaditya in the 7th century. Its built on a high base with carvings on animals and zodiac signs. The dwarfs are carved on the base of sabha mantapa are worth watching. 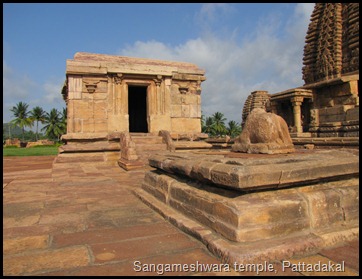 Virupaksha temple was built by Lokadevi, Queen of Vikramaditya -II as mentioned earlier. It was built in the 7th century in Dravidian style of architecture and resembles the temples of Kanchipuram. The hall consists of 18 pillars with many stories on Ramayana, Mahabharata and Panchatantra carved on them. One pillar reveals that women in those days used to wear skirts and fancy bags as they do today. Also the Nandi bull and an elephant are shown in a single frame identified separately by covering a part of it. It has a typical Dravidian shikhara and gopuram. There is a giant pillar outside the temple with inscription explaining the victory of the king against the Tamil kings. One of the window carving is like a snake tangled itself artistically. The other window shows the Garuda as is the Karnataka state emblem. The temple leads the way to a huge Nandi inside a mantap and leads further to the banks of Mallaprabha river. 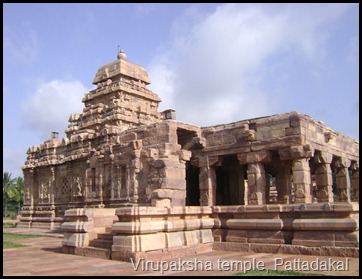 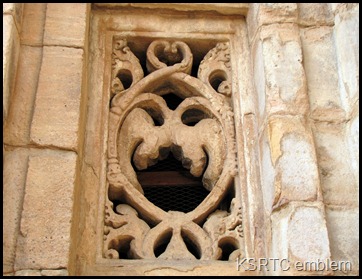 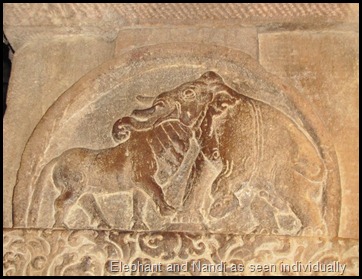 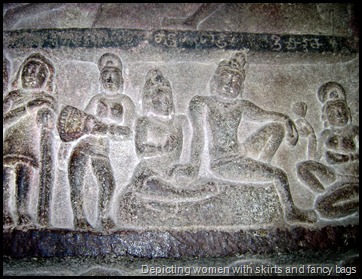 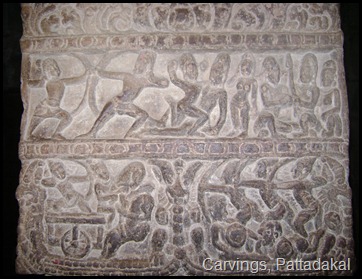 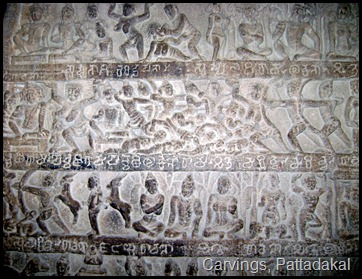 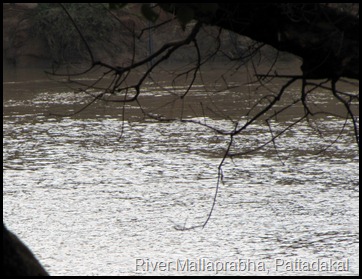 There is a big Victory Pillar with inscriptions explaining about the victory of the Chalukyas over the rulers of Kanchi. 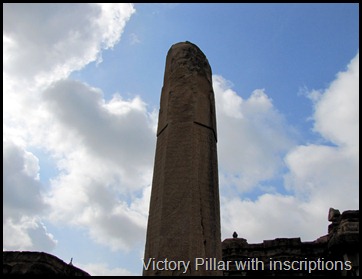 The next big temple is the Kashi Vishwanatha temple built in Nagara style and resembles the Sun temple of Konark, 0rissa. It is having a typical North Indian style gopuram and has intricate carvings. 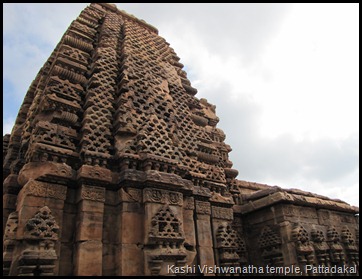 Jain temple: It is located on Badami-Pattadakal road built in Dravidian style by the Rashtrakutas in the 9th century. It has some beautiful sculptures carved on the walls.
The villagers in Pattadakal feel proud to be associated with the Chalukyan capital and when asked where they live, they reply saying that they live in the temple complex of the Chalukyas. 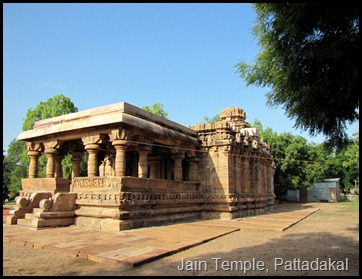 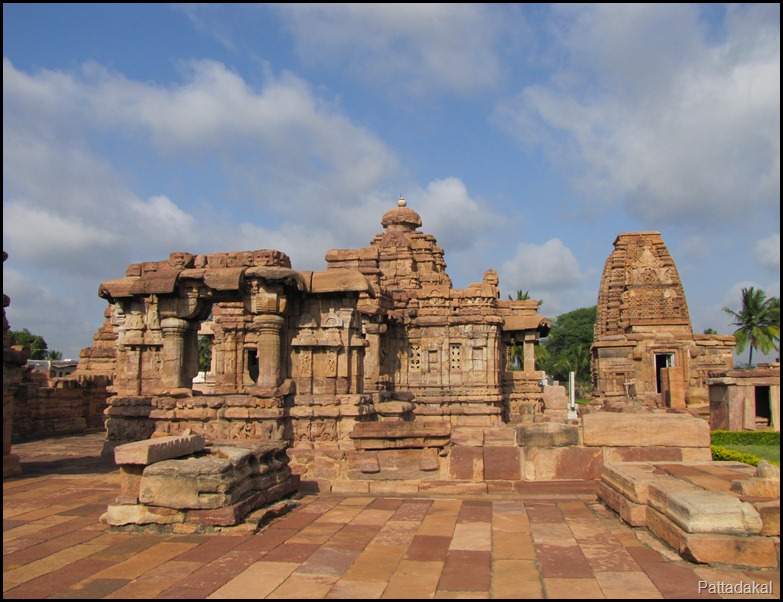 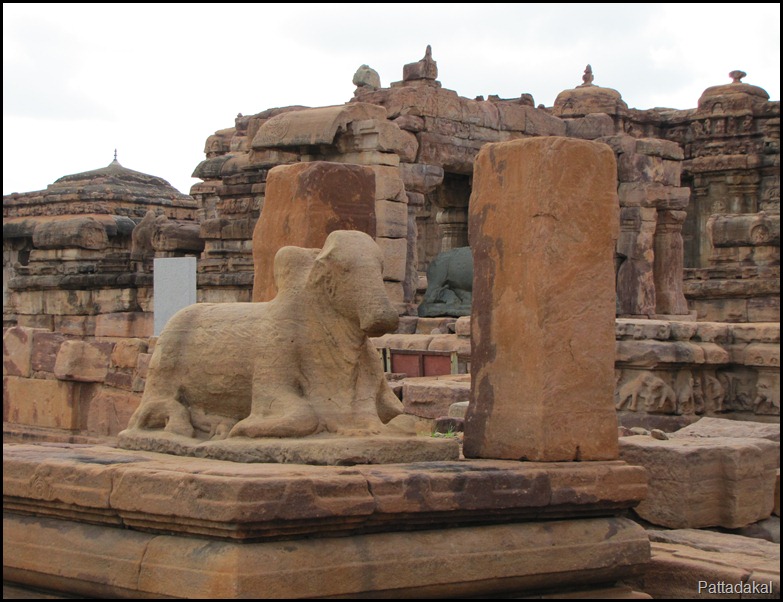 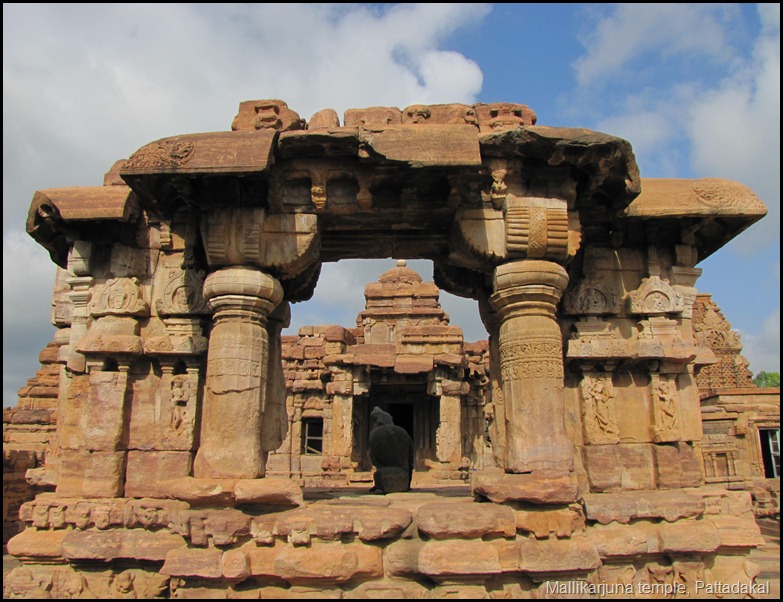 How to reach: The best option to travel is by rail from Bangalore. Train no 06535 Bijapur express on Sunday, Tuesday, Wednesday, Friday and 16535 Gol Gumbaz express on other days leaves Yesvantpur at 19:45 and reached Badami the following day at 07:33. Return train departs from Badami at 20:00 and reaches Yesvantpur the following day at 09:15.
Many KSRTC buses are available from major cities in Karnataka to Badami. From Badami, either hire an taxi/auto or private bus to Pattadakal.
By Car: Around 500 kms from Bangalore, take the NH4 towards Tumkur, At Chitradurga, turn right towards NH13 to Hospet, from Hospet, travel towards Gadag on NH 63. From Gadag take the Badami road via Ron. From Cholachalgudda, turn right towards Pattadakal.
Reference: http://en.wikipedia.org/wiki/Pattadakal
Map: