Overview: Every trip to Kukke Subrahmanya temple is very memorable. We set off in monsoon this time, that was for a special puja at the temple by a relative. We booked a tempo traveller this time as the number of people were more. We started from Bangalore at around 10am on a cloudy morning. We had our first pit stop at Yediyur where we had some snacks and coffee. Then our next stop was Hassan where we had lunch. One good thing about monsoons is that we can see streams of water flowing everywhere and is a pleasant sight. Once we reached the Shiradi ghat on the Bangalore-Mangalore highway the nightmare started. The roads were like non-existent in those areas. Full of potholes and the vehicles were piled up on the road. Slowly we crawled in that stretch but the scenic beauty around us made us forget the traffic. We reached Kukke Subrahmanya at around 6pm as we crossed over the Kumaradhara river and checked into a hotel. 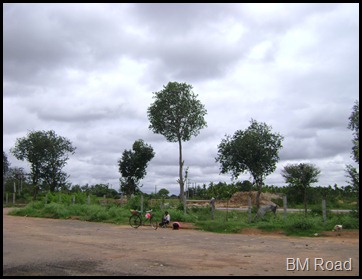 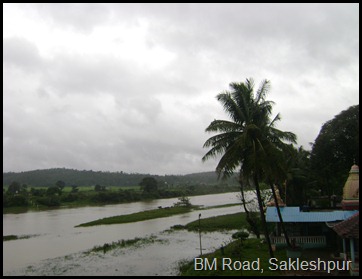 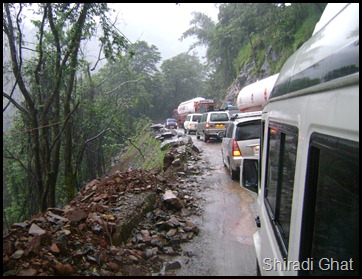 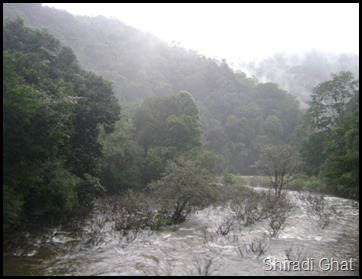 Next morning we visited the main temple of Kukke Subrahmanya after having a holy dip in Kumaradhara. The temple looks pristine with the Kumaraparvatha hills in the backdrop. Instead of gaining popularity this temple has maintained its beauty. We went pretty early in the morning so there was less crowd to deal with. We had the darshan of the Lord and our relatives got busy with the special pujas. Many doshas like the Sarpa Dosha puja is performed to free a person from the burden from his previous births. Apart from the main temple, there are several other temples nearby which can be reached by foot. On visiting these temples we went to the hotel and checked out. On our way we went to Kukke Sri Abhaya Mahaganapati temple which has a huge idol of Ganapati. Next to this is the Vanadurgi temple built in traditional style. 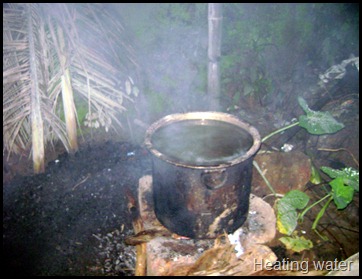 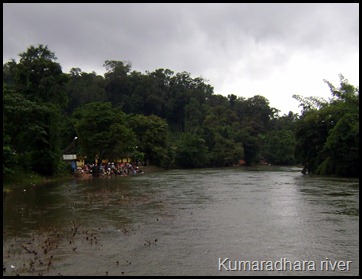 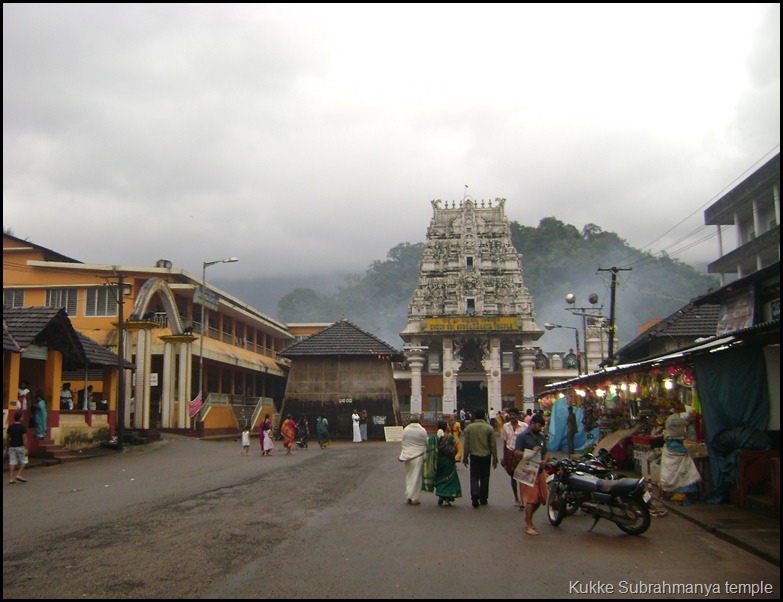 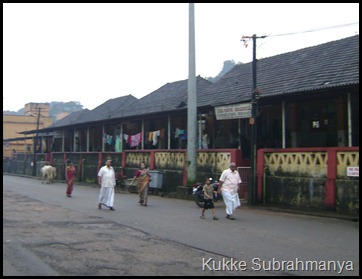 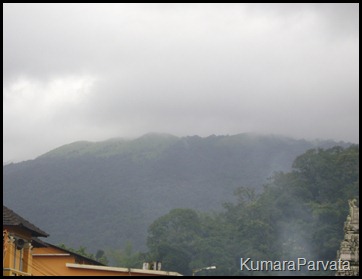 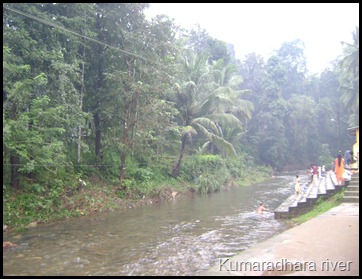 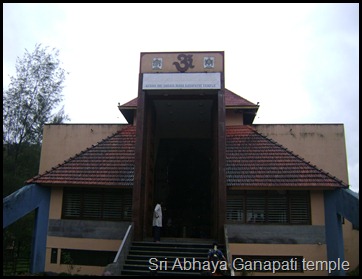 From here we proceeded towards Dharmasthala. We reached Dharmasthala in around 1.5 hours crossing curved roads lined with forest. At Dharmasthala it was slightly drizzling but we proceeded towards the temple to have darshan. The crowd at Dharmasthala was a big one as it was mid-day and many devotees were lined up though it was well managed by the staff. After the darshan of the Lord Manjunatha, we went for the prasadam or Lunch. It was a huge dining hall and food served was piping hot. It was a wonderful lunch at the temple. One special feature of this temple is that it is administered by the Jains and the priests are Hindu Brahmins.
From the temple, we went to the Netravati which was full because of the heavy rains in the region. 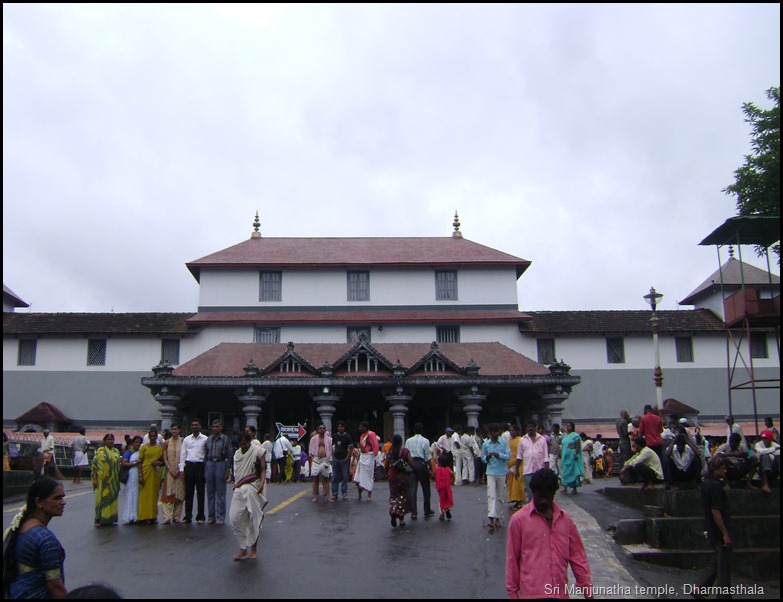 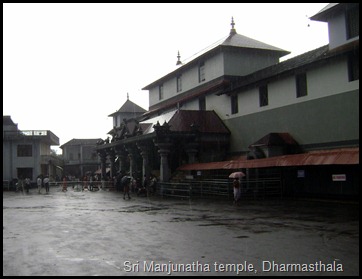 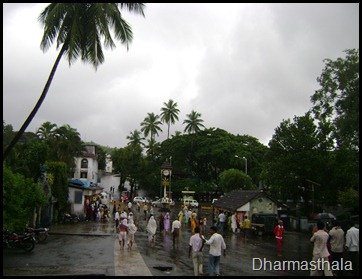 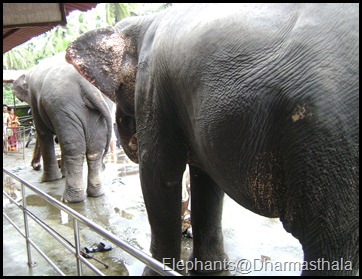 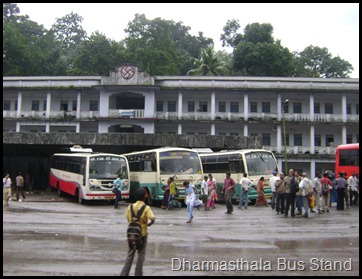 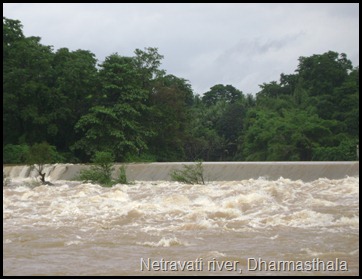 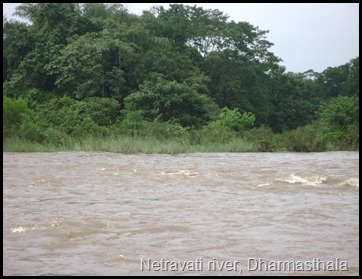 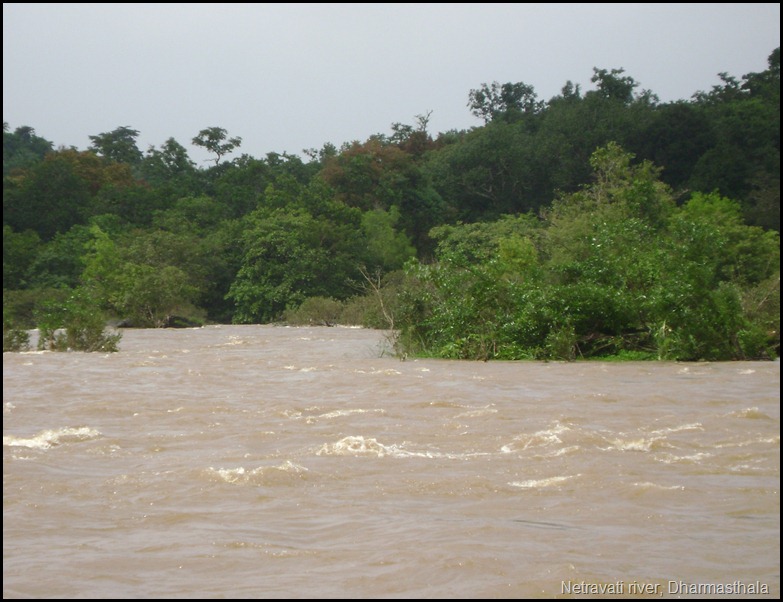 From there we went to Ujire which is known for the Surya temple believed to be very powerful and anything asked in good faith is fulfilled. Unfortunately the temple was closed and we had to leave.
After experiencing the plight at the Shiradi Ghat, we decided to try the alternate route to Bangalore, via Charmadi Ghat. And Luckily this road was in much better shape and we were blessed with lovely weather and lot of waterfalls on the way. Charmadi Ghat is also popular among trekking enthusiasts. Will chalk out a plan to trek here sometime. It started raining very heavily by the time we were in the plains. On our way back we went to the Belur Chennakeshava temple and went for the evening Mangalarti. It was dark so we couldn't appreciate the beauty of the carvings of the Hoysalas. 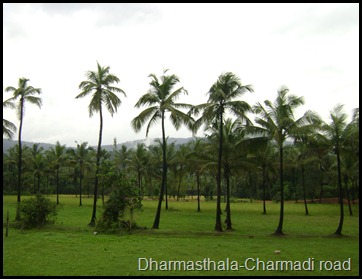 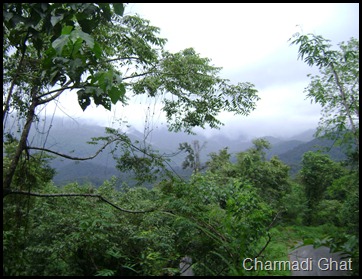 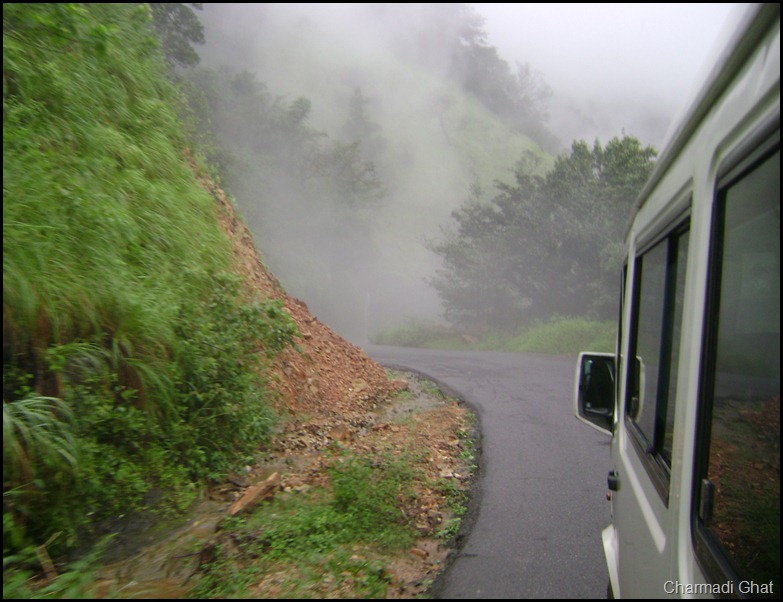 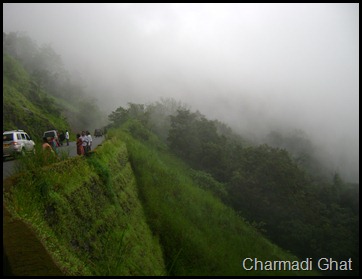 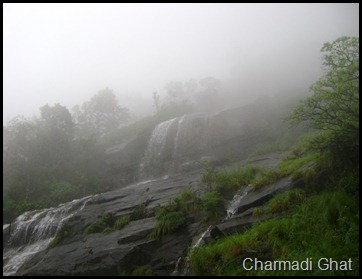 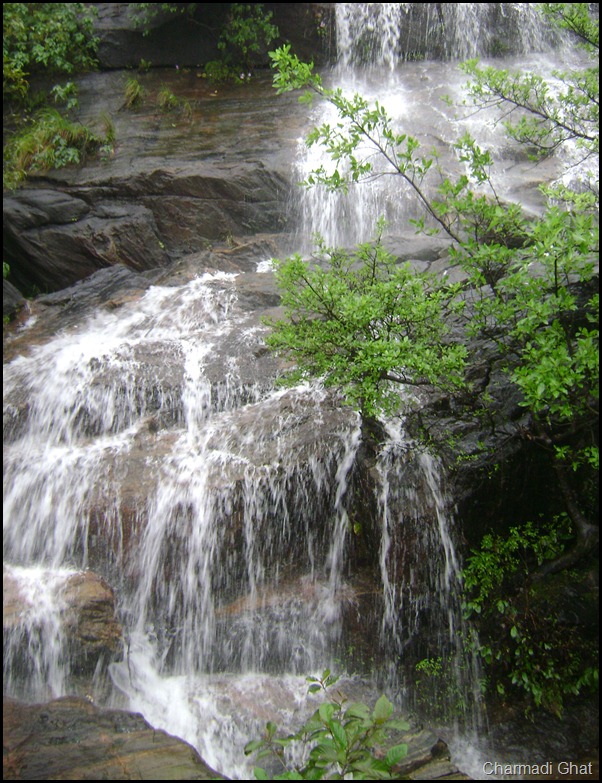 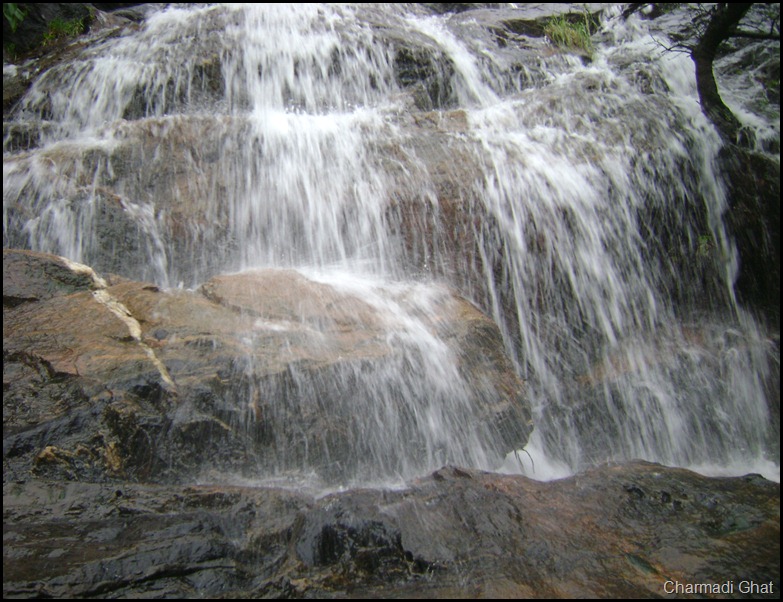 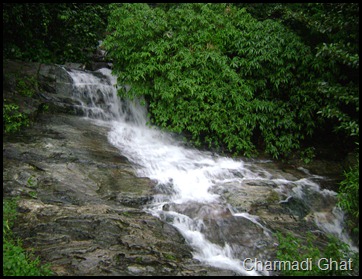 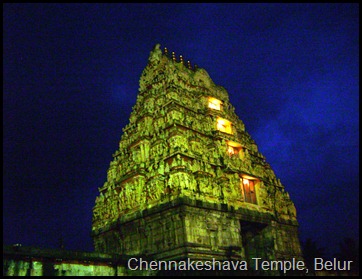 After this we headed back to Bangalore non-stop.
References: http://en.wikipedia.org/wiki/Kukke_Subramanya_Temple
http://en.wikipedia.org/wiki/Dharmasthala
How to reach: Bus: KSRTC buses ply from Bangalore to Dharmasthala and Kukke Subrahmanya. There is also good connectivity between Dharmasthala and Kukke Subrahmanya
Train: Train No. 16515 YPR-Mangalore exp leaves Yesvantpur at 7:30 am and reached Subrahmanya Road at 3:10pm in the afternoon on Monday, Wednesday and Friday; and train no 16517 YPR-Kannur exp leaves Yesvantpur at 08:55pm and passes via Bangalore City and Mysore to reach Subrahmanya road at 5:30am daily. From Subrahmanya road, plenty of options available to go to the temple.
Return train 166516 leaves Subrahmanya road at 10:50am and reaches Yesvantpur at 7:25 pm on Tuesday, Thursday and Saturday; and 16518 leaves Subrahmanya road at 9:50pm and reaches Bangalore City at 7:05 am daily.
By Bike/Car: Take the Bangalore-Mangalore road, after crossing Shiradi Ghat, turn left at Gundya checkpost towards Kukke Subrahmanya. To reach Dharmasthala, return back to Gundya and turn left.
Food/Accommodation: Food(Prasadam) is available at temples in Dharmasthala and Kukke. Also many restaurants are present in these places. Accommodation is also available in these places but can become difficult in peak season.
Map: